Results Available at Shannon Sports IT 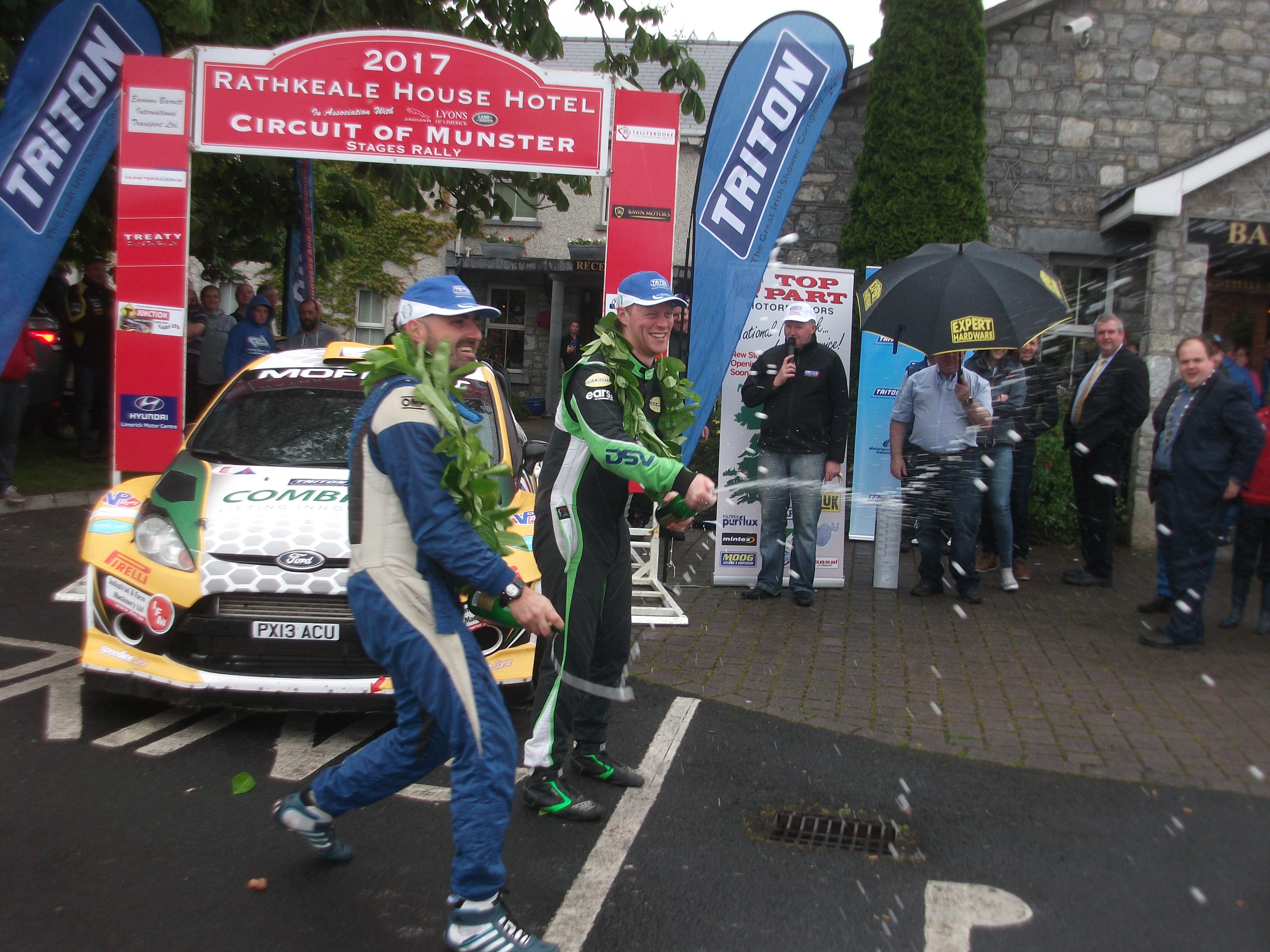 Photos by Rally Through a Lens

Monaghan’s Sam Moffett (Ford Fiesta WRC) strengthened his grip on the Triton Showers National Rally Championship when claiming the Rathkeale House Hotel Circuit of Munster Rally, round four of the campaign.
Partnered by local co-driver Keith Moriarty, and after yesterday’s nine stages that had a mixed bag of weather conditions, they enjoyed a winning margin of 12.4 seconds over the Ford Focus WRC of former Triton champion Donegal’s Donagh Kelly and his Monaghan co-driver Conor Foley. Ulster’s Alastair Fisher/gordon Noble in the less powerful Ford Fiesta R5 were a minute and 39.4 seconds further behind in third.
Victory in the Group N category went to Limerick’s Colm Murphy (Subaru) and his Cork co-driver Don Montgomery, and Tyrone’s Vivian Hamill/denver Rafferty (Escort) were the top two-wheel drive exponents.
Series leader Moffett (Fiesta WRC) was quickly into his stride and took a 3.1 second lead on the opening stage from Kelly with Declan Boyle (Fiesta WRC) a further 9.4 seconds adrift in third from the Fiesta R5 of Alastair Fisher, who was 1.8 seconds further behind followed by Desi Henry (Skoda Fabia R5).
Kelly, like many others, dovetailing a Triton bid with a shakedown for the forthcoming Donegal International Rally, proved quickest on second stage and Declan Boyle (Ford Fiesta WRC) topped the timesheets on the third test.
Rally leader Kelly arrived at the Newcastle West service park with a 3.1 second advantage over Moffett, who declared that his performance on the second and third stages wasn’t of his usual standard.
Boyle was next but lost ground due to the set-up issues, he was 19.7 seconds further behind. Alastair Fisher in fourth was the highest placed R5 car in a top six that also included Manus Kelly (Subaru) – he backed off due to an incorrect tyre choice; Keith Cronin (Fiesta R5), who dropped from fourth following a major overshoot.
Desi Henry in seventh lost a chunk of time when he slid his Skoda Fabia R5 into a ditch (S.S. 3). Roy White (Fiesta WRC) in eighth selected the wrong tyres, Josh Moffett (Fiesta R5) endured a spin on S.S. 3 and Niall Maguire, who completed the top ten, stalled his Subaru on the opening stage.
Athea driver Colm Murphy (Subaru) on his first rally in over three years led Group N as pre-event Motorsport Safety Team leader David Guest (Mitsubishi) lost several minutes when he slid into a drain and required the help of several spectators to get back on track.
Although Kelly pushed his lead over Moffett out to 6.4 seconds on S.S. 4, he had to give way to the Monaghan man on the remaining two stages. At the final service halt, Moffett led Kelly by 2.1 seconds. Alastair Fisher (Fiesta R5) moved up to third when Declan Boyle (Fiesta WRC) retired after he punctured and lost over five minutes on S.S. 5. Elsewhere, Manus Kelly (Subaru) was fifth and Keith Cronin, utilising the rally as a shakedown for his next outing in the British Rally Championship and using BRC controlled tyres and fuel, made some adjustments to his Fiesta R5 following some steering issues. Reigning Triton champion Roy White (Fiesta WRC) held sixth.
Moffett went on to secure his fourth win of the Triton campaign with Kelly and Fisher completing the top three. Elsewhere, there were no changes, Guest retired with transmission problems. Monaghan’s Jonny Treanor (Honda Civic) won the Junior category.

Click here for Online Entry at Shannon Sports IT

The club has prepared an amazing 68 page programme to celebrate the huge & quality entry to this year's Rathkeale House Hotel Circuit of Munster ...Stages Rally. The following is a list of outlets which it is now available at a great price of €10.... 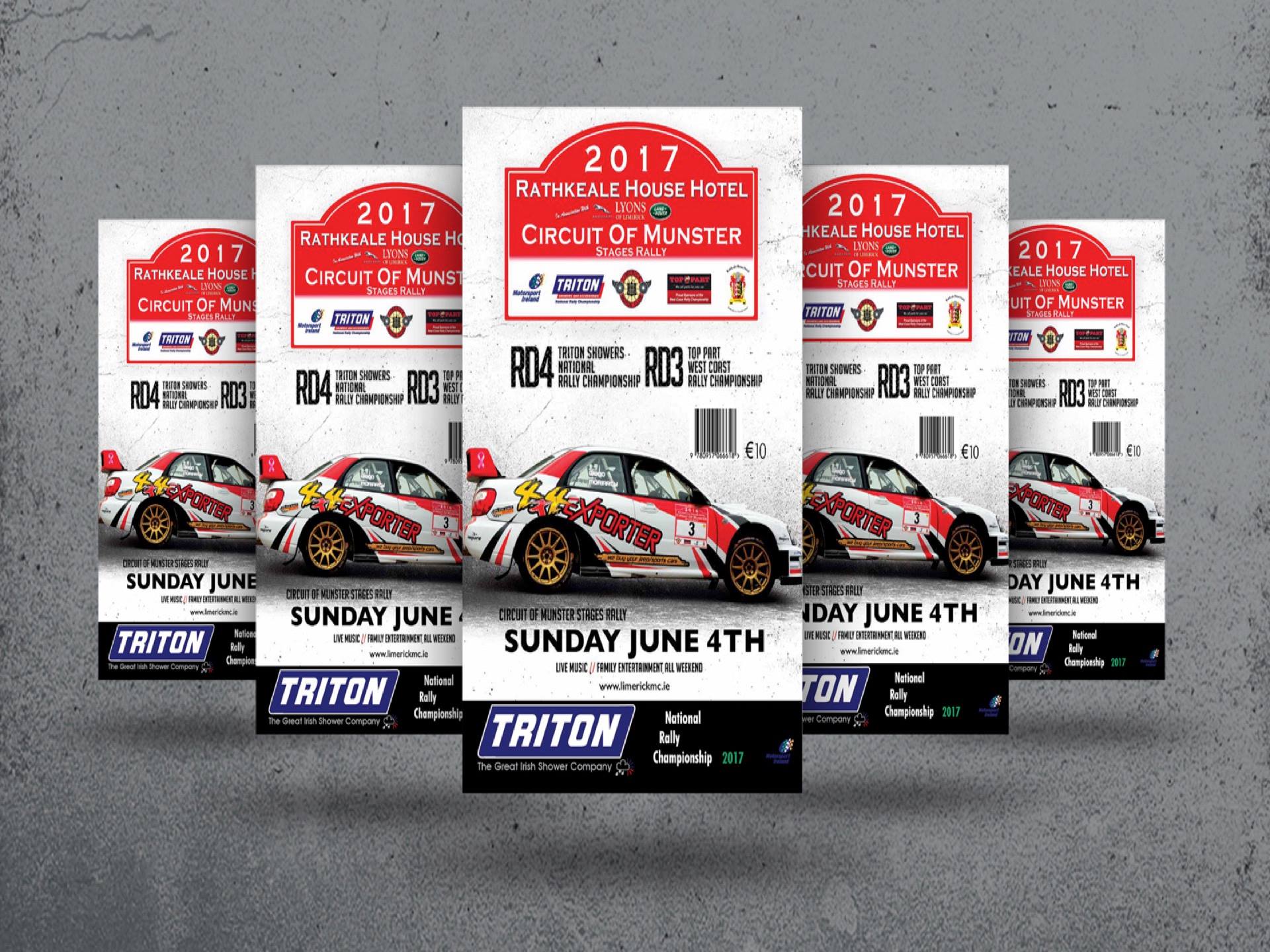 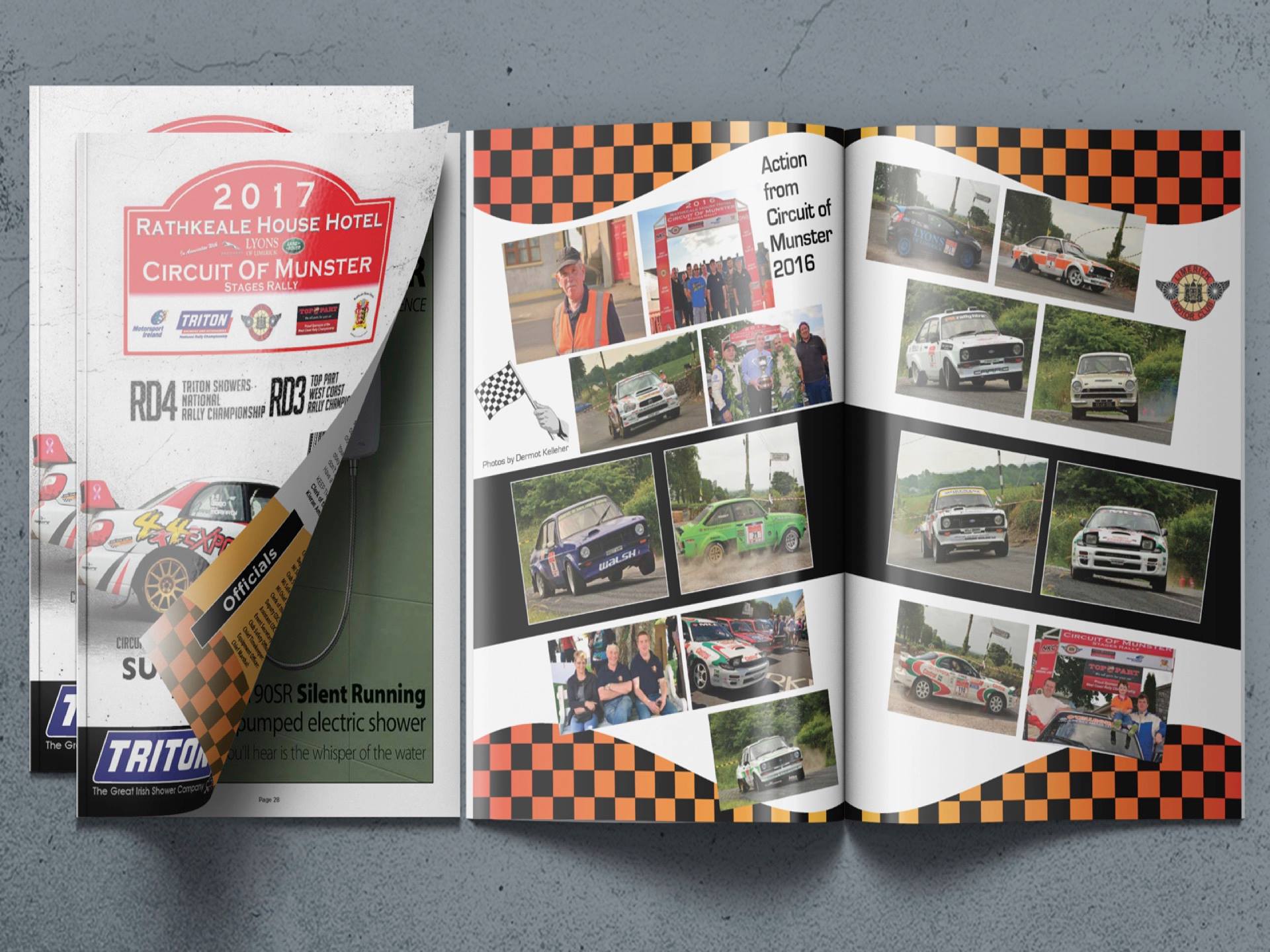 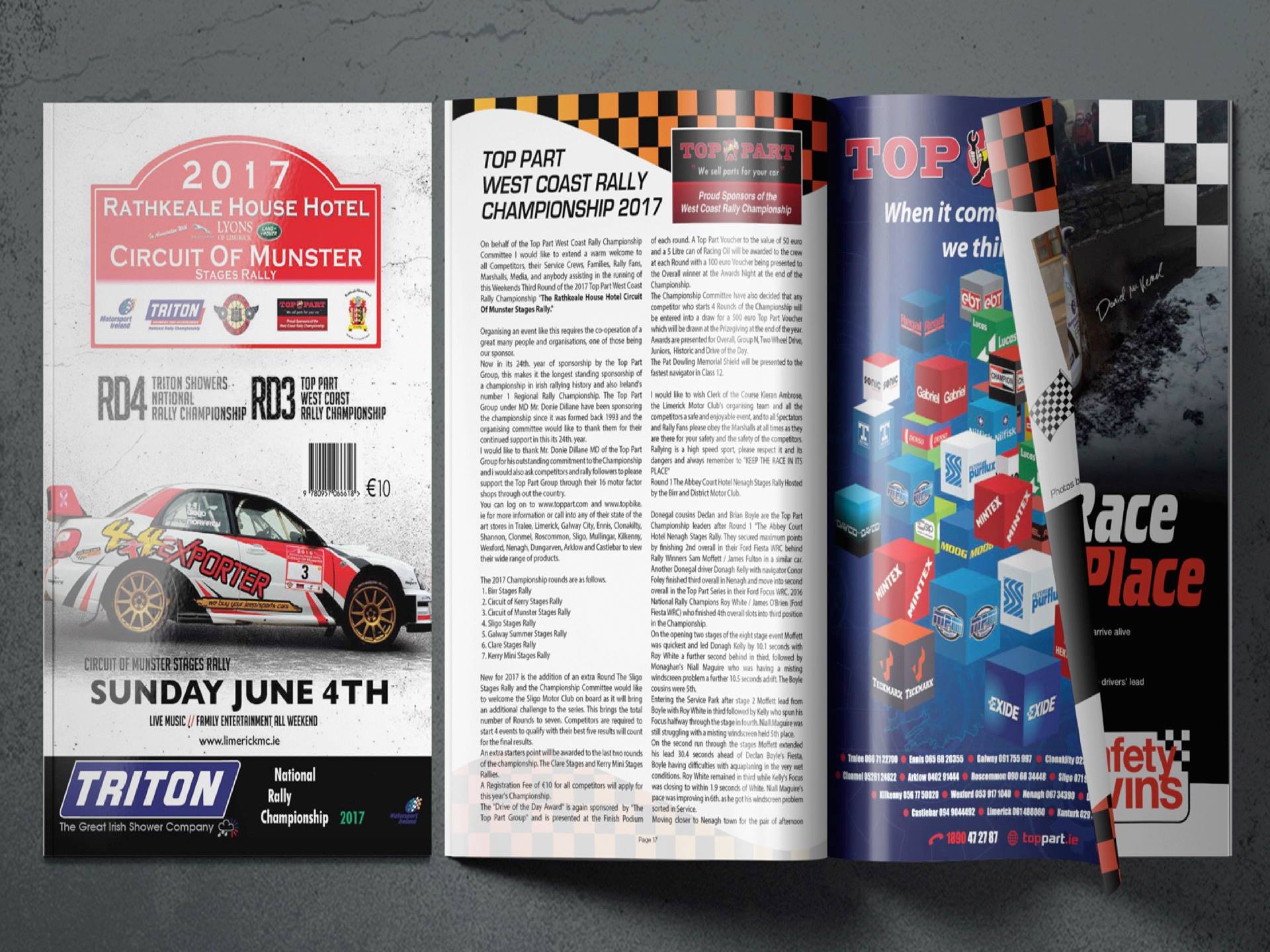 See videos and photos of launch event on facebook

The 2017 Rathkeale House Hotel Circuit of Munster Stages Rally in association with Lyons of Limerick, is only 3 weeks away and revs are building for this year’s event and the excitement continues to build. Final preparations of man and machine is now beginning at a frantic pace and final checks are beginning.

Regulations and entry forms are available though the usual links such as; www.shannonsportit.com and www.limerickmc.ie. COC Kieran Ambrose is very excited to announce easy payment and early incentive scheme for competitors for this years event. This consists of entry completed and full payment made to rallies secretary on or before the 17th May,2017, where a voucher to the value of €70 is then made available to competitor’s on rally weekend and is redeemable against anything at rally HQ; Rathkeale House Hotel. This could include accommodation costs, food or drinks. Handy, if you have a rally crew to feed or if the family & your biggest fans, are in attendance! Kieran would like to thank Damien of Rathkeale House Hotel, for giving the Circuit of Munster Rally committee the opportunity to give something back to the competitor in these rally expensive times!

With crews normally taking the Saturday of the event, the 3rd of June to complete the recce, Hotels and Bed and Breakfast rooms are at a premium. Also restaurants, cafes and shops along the route will benefit as drivers and co-drivers need to be refuelled.

A familiar area of West Limerick greets the crews for the stages on Sunday, however, the stages haven’t been used at the Circuit of Munster for a good few years and indeed, have not been used in these versions/variations ever! Centralised servicing is now moved from Rathkeale and re-located to the bustling town of Newcastle West and a fantastic West Limerick welcome is sure to materialise.

9 stages in 3x3 format will test man and machine, from 9am approx. to 5.30pm on Sunday 4th June, covering 120 stage km’s with little road mileage. The stages are fast, flowing with lots of ‘technical bits’ which will test the driver’s and co-driver’s abilities.

When the crews arrive back at the Rathkeale House Hotel on Sunday evening, celebrations will commence and the party will continue into the ‘wee’ hours!!!! Remember, Limerick Motor club have the envious position of hosting the Circuit of Munster on the June Bank weekend, so there is no hurry home for work on Monday morning.

So, come join us in 3 weeks time in Limerick, where rally HQ is only 20 miles from the M7 motorway, for a petrol fuelled, fun-packed, family orientated and huge welcome will be in store for you and most importantly, one of the best value, one day rallies, you will get this year in Ireland.

Come rallying to Limerick, you won’t regret it!

Limerick Motor Club and the 2017 Rathkeale House Hotel Circuit of Munster Stages Rally committee, are delighted to announce that they will return to the West Limerick town of Rathkeale (which is only 20 miles off the M7 motorway) where the annual Circuit of Munster stages Rally takes place on Sunday the 4th of June, 2017 (June Bank holiday Weekend).

Last year, Rathkeale and its surrounding hinterlands has been hugely supportive to the Circuit of Munster Stages Rally and Limerick Motor Club would like to take this opportunity to thank all their sponsors, associated businesses in Rathkeale and the surrounding area, the local residents, Rathkeale House Hotel, which is again rally HQ, Rathkeale Town business committee, the Garda Siochana and Limerick County Council for their unprecedented support last year & we wish that this support will continue.

With entries opening very soon, rally organisers, under the stewardship of, once again Clerk of the Course for 2017, Kieran Ambrose have plans at a very advanced stage for this years rally. Even before, rally regs have been released, leading and regular Triton Showers National Rally Championship contenders have contacted rally officials in relation to accommadation for the first weekend of June.

This year's Circuit of Munster Stages Rally will challenge competitors as they weave their way along the dramatic scenery of the hills and valleys on perfect tarmac in the West Limerick lanes, located to the West of towns of Rathkeale and Newcastlewest. 3 fantastic stages covering the maximum allowed of 120km, with low road mileage, on some of the best driving roads from start to finish. It promises to be spectaclar and be an exciting race fueled weekend for competitors and spectators alike and is a must for all the family.

We wish to thank our hosts and rally HQ, Rathkeale House Hotel, who have come on board again as main sponsor for the event and will host rally HQ from 3rd to 5th of June. We would also like to thank our associate sponsors, Lyons of Limerick and of course our many stage sponsors without whom their deep pockets, we would not be able to organised & promote our flagship event.

The 2017 Circuit of Munster is Round 4 of the Triton Showers National Rally Championship & Round 3 of the Top Part West Coast Rally Championship of which we are expecting a big entry come June Bank Holiday weekend in Limerick county.

With a compressed and compact loop of 3 stages done 3 times, giving a total of 120km on 9 brillant stages, the competing crews can look forward to the superb West Limerick tarmac in a mixture of fast open roads with many tight sections, in perfect quantities which will challenge even the most experienced drivers and navigators.

If you enjoy the challenge which comes from special stage rallying & you are up for the experience, which is the 2017 Rathkeale House Hotel Circuit of Munster Stages Rally, we look forward to welcoming you all to Rathkeale on the June Bank Holiday 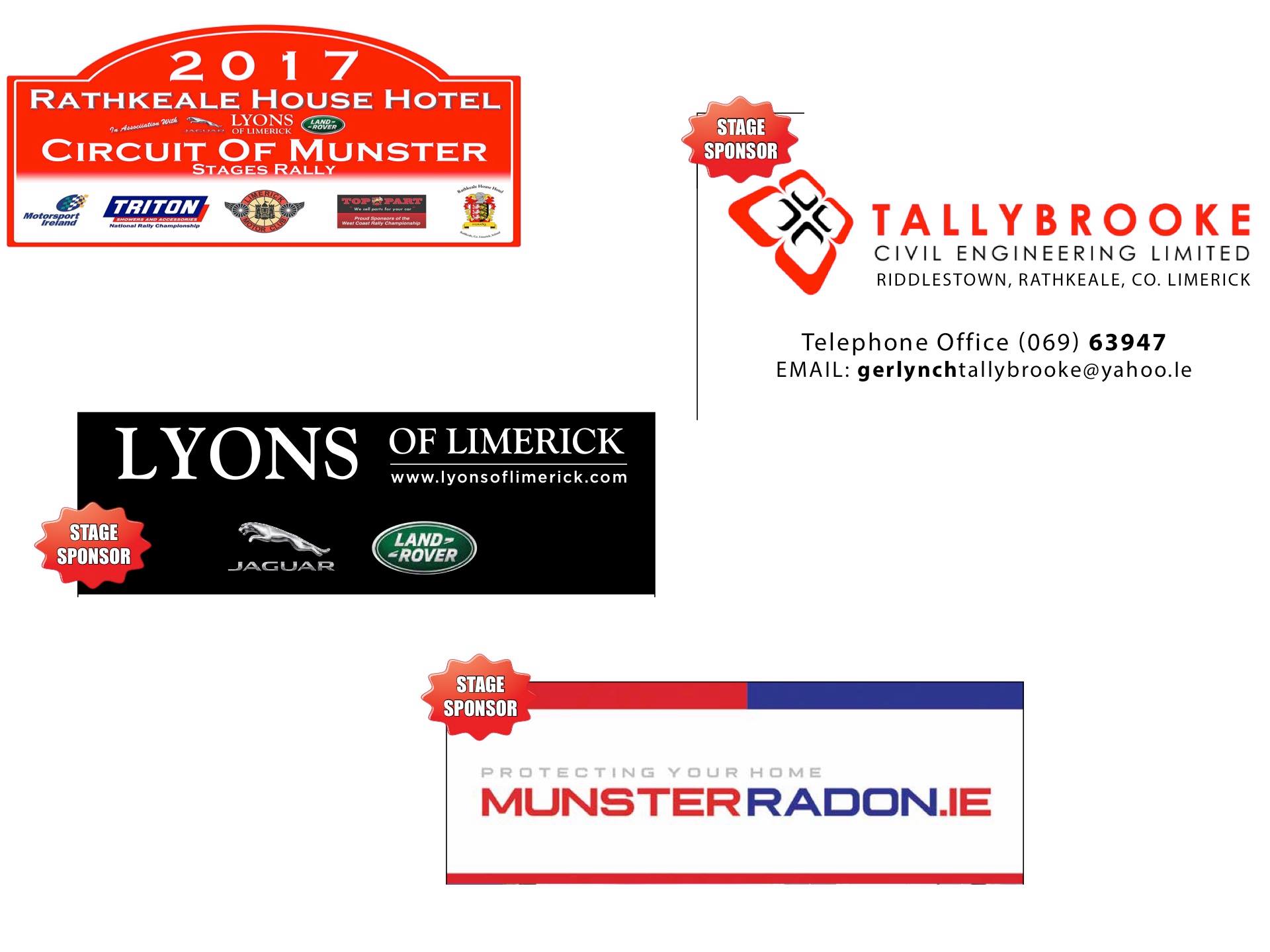 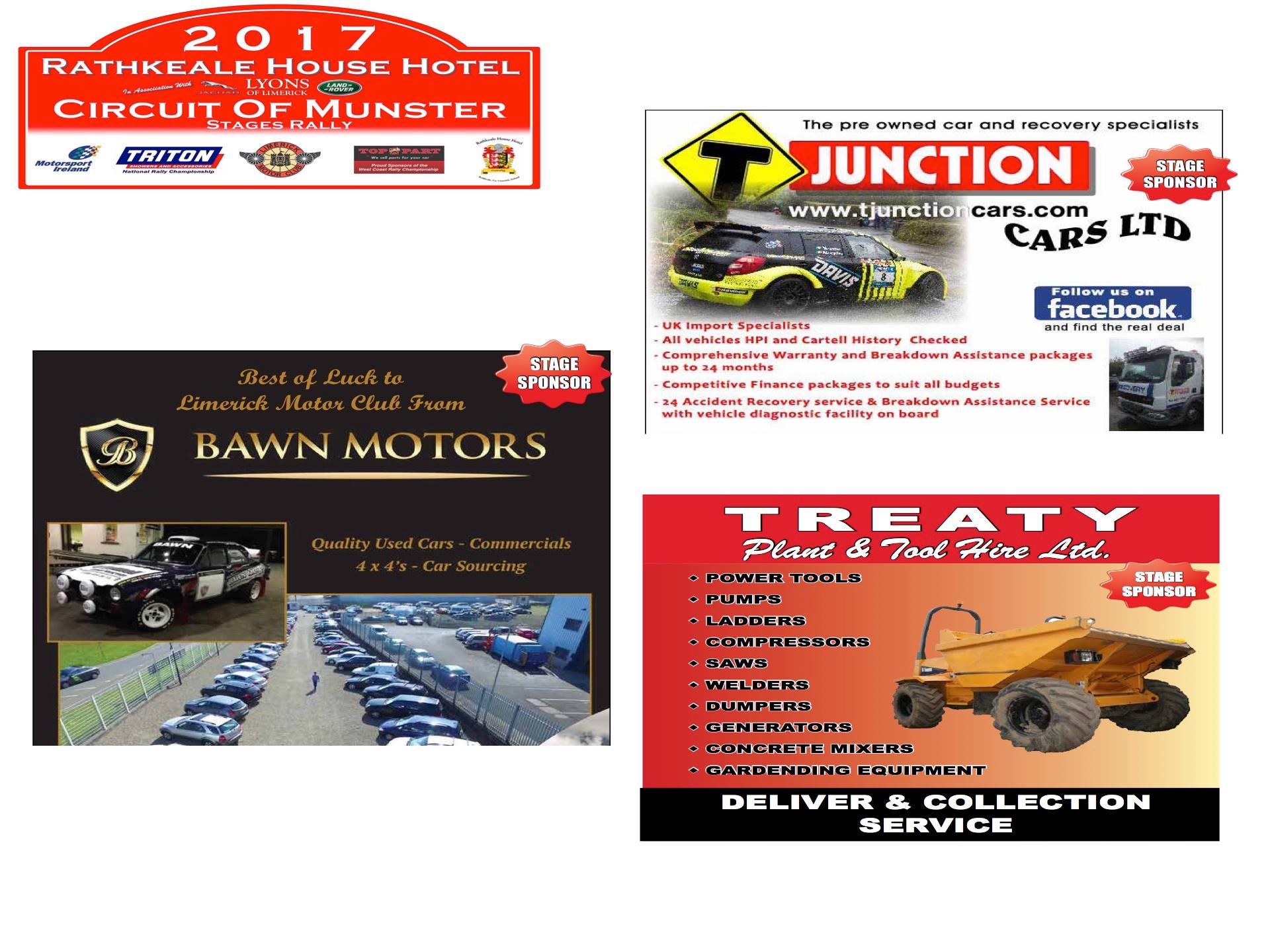 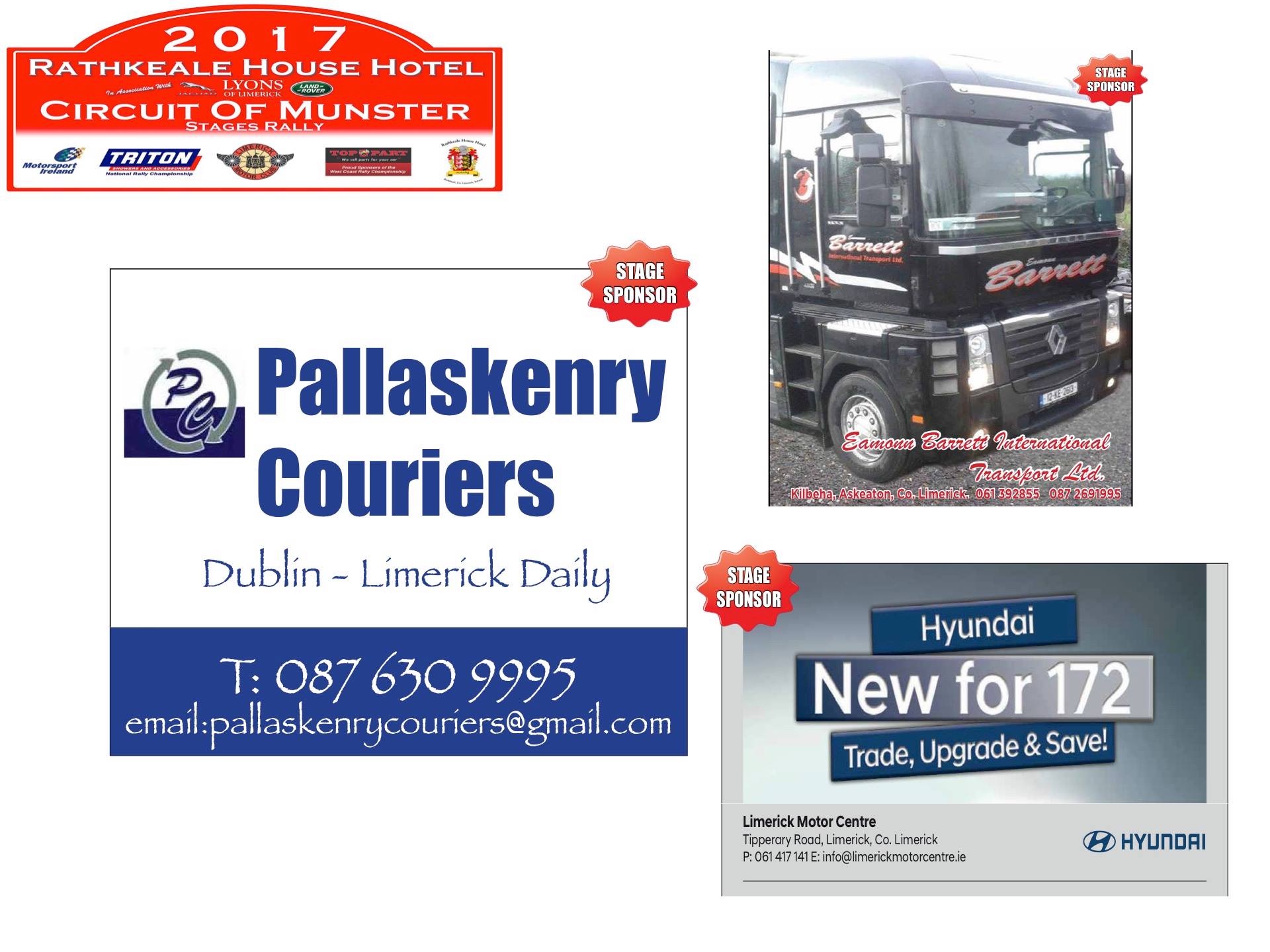 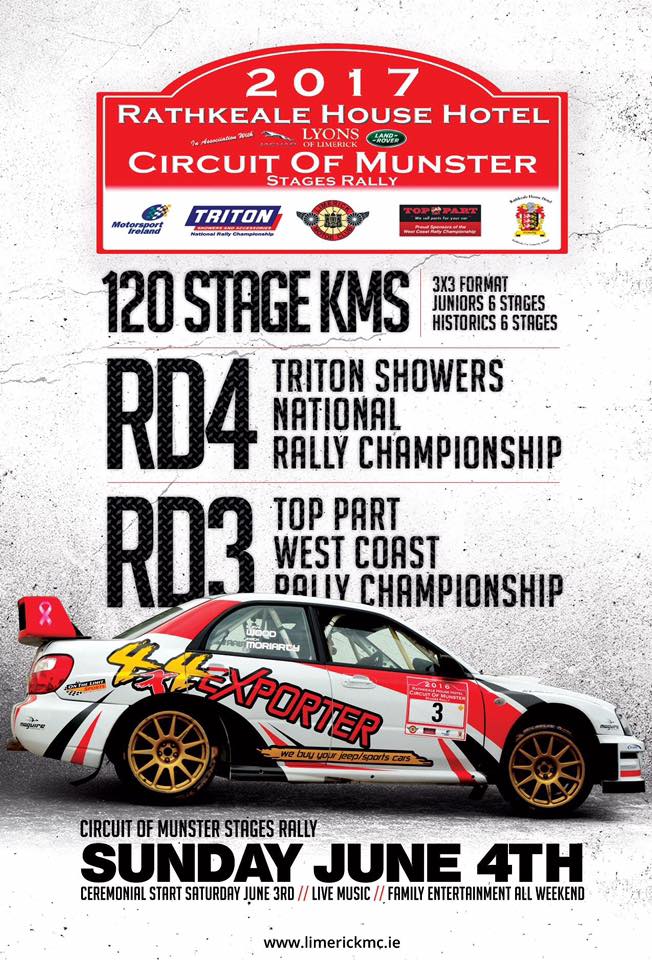