Four times British Rally champion Keith Cronin, from Ballylickey in West Cork, headed a family 1-2 in yesterday’s Rathkeale House Hotel Circuit of Munster Rally, leading from start to finish as he beat his younger brother by almost two minutes over the nine stages.

Keith, with regular co-driver Mikie Galvin, used the day to get more accustomed to his new Hyundai before the next cross-channel round as he mounts his defence of last year’s British series, while Daniel and his co-driver J J Cremin in their Fiesta were more than half a minute ahead of third placed Ed Synan and Tom Collins in an Impreza.

30 May 2018 The time & distance schedule for the 2018 Rathkeale House Hotel Circuit of Munster Stages Rally is available on request by sending an email to:This email address is being protected from spambots. You need JavaScript enabled to view it.

If you are thinking of doing the rally, Can you please send in your entries to Ger or through shannonsportsit.ie at your earliest convenience please, 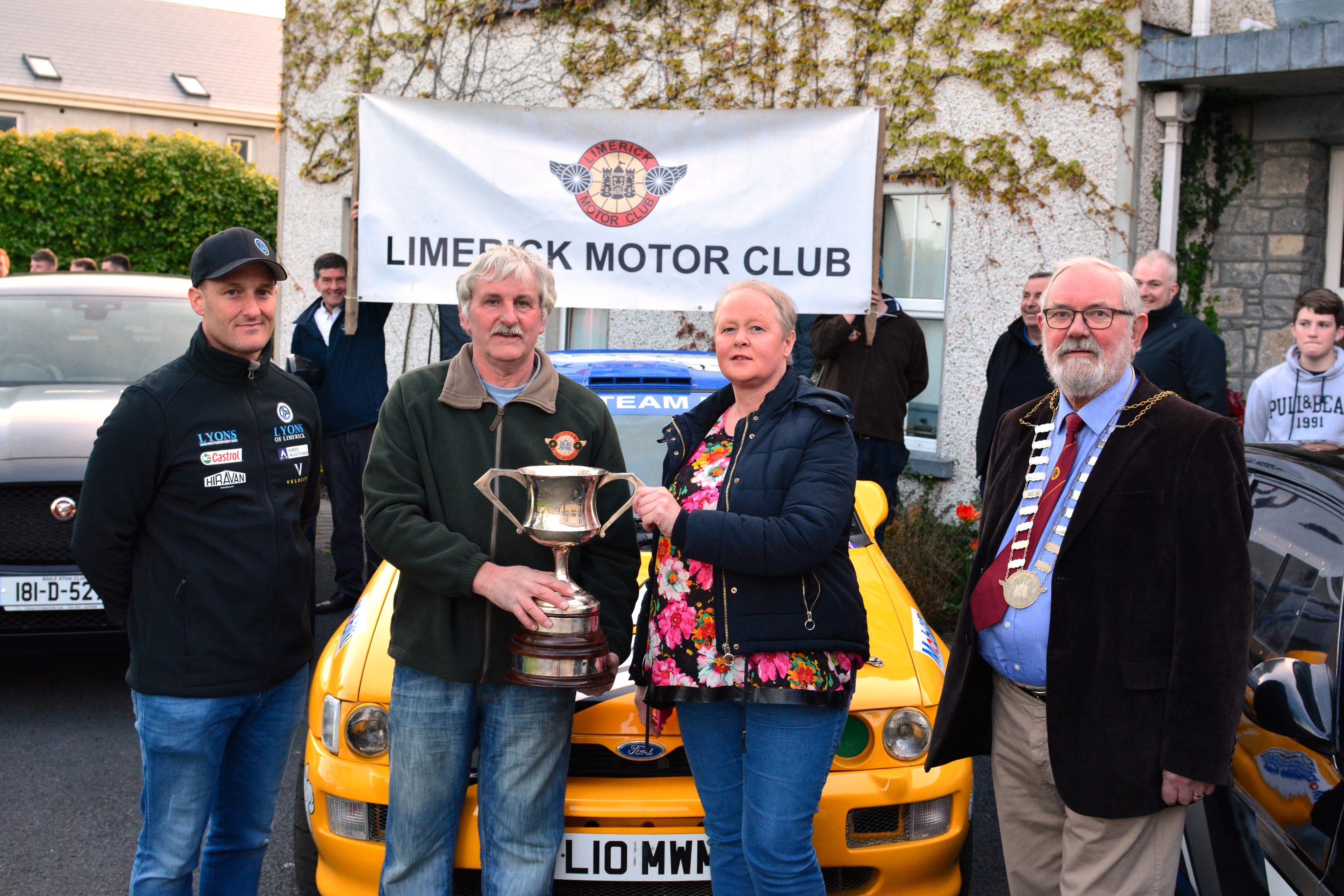 The 2018 Rathkeale House Hotel Circuit of Munster Stages Rally in association with Lyons of Limerick is go!

Limerick Motor Club and the 2018 Rathkeale House Hotel Circuit of Munster Stages Rally committee, with new Clerk of the Course, Shane O’Callaghan are delighted to announce that they will return to the West Limerick town of Rathkeale (which is only 20 miles off the M7 motorway) where the annual Circuit of Munster stages Rally takes place on Sunday the 3rd of June, 2018 (June Bank holiday Weekend).
For the last 2 years, Rathkeale and its surrounding hinterlands have been hugely supportive to the Circuit of Munster Stages Rally and Limerick Motor Club would like to take this opportunity to thank all their sponsors, associated businesses in Rathkeale and the surrounding area, the local residents, Rathkeale House Hotel, which is again rally HQ, Rathkeale Town business committee, the Garda Siochana and Limerick County Council for their unprecedented and continued support & we wish that this collaboration will continue for 2018.
With entries opening very soon, rally organisers, under the stewardship of, new Clerk of the Course for 2018, Shane O’Callagahan have plans at a very advanced stage for this years rally. Even before, rally regs have been released, leading competitors from around the country & overseas have contacted rally officials in relation to accommodation for the first weekend of June. We will be publishing a Rally Guide in due course with all details very soon.
This year's Circuit of Munster Stages Rally will challenge competitors as they weave their way along the dramatic scenery of the hills and valleys on perfect tarmac in the West Limerick lanes, located to the West of towns of Rathkeale and Newcastlewest. 3 fantastic stages covering the maximum allowed of 120km, with low road mileage, on some of the best driving roads from start to finish. It promises to be spectaclar and be an exciting race fueled weekend for competitors and spectators alike and is a must for all the family.
We wish to thank our hosts and rally HQ, Rathkeale House Hotel, who have come on board again as main sponsor for the event and will host rally HQ from 1st to 4th of June. We would also like to thank our associate sponsors, Lyons of Limerick and of course our many stage sponsors without whom their deep pockets, we would not be able to organised & promote our flagship event.
The 2018 Circuit of Munster (Limerick) is Round 3 of the Top Part West Coast Rally Championship of which we are expecting a big entry come June Bank Holiday weekend in Limerick county.
With a compressed and compact loop of 3 stages done 3 times, giving a total of 120km on 9 brillant stages, the competing crews can look forward to the superb West Limerick tarmac in a mixture of fast open roads with many tight twisty technical sections, in perfect quantities which will challenge even the most experienced drivers and navigators.
If you enjoy the challenge which comes from special stage rallying & you are up for the experience, which is the Circuit of Munster Stages Rally, we look forward to welcoming you all to Rathkeale on the June Bank Holiday! We promise a great weekend’s rallying, which is competitor friendly and a party on Sunday night!

And you don’t have to be home for work on Monday morning. Limerick is the place to be on June Bank holiday for high revs, high octane & full of action.
Keith McCarthy 2018 Circuit of Munster PRO 14 April 2018

Well folks ,now that we have a very successful forest rally under our belts let's concentrate on the 3rd of June. That means 50 DAYS to Circuit of Munster June Bank Holiday Weekend.
The format will be the same as last year, three stages run three times in West Limerick, with central service in Newcastlewest.
Rathkeale House Hotel are once again our Headquarters  for the weekend with scrutiny, parc feirme and trailer park close by. This year we are a counting round of the Top Part West Coast Championship so let's all get on board and run a good clubman rally, something Limerick Motor Club is noted for.
Shane O’Callaghan
Clerk of Course Circuit of Munster 2018. 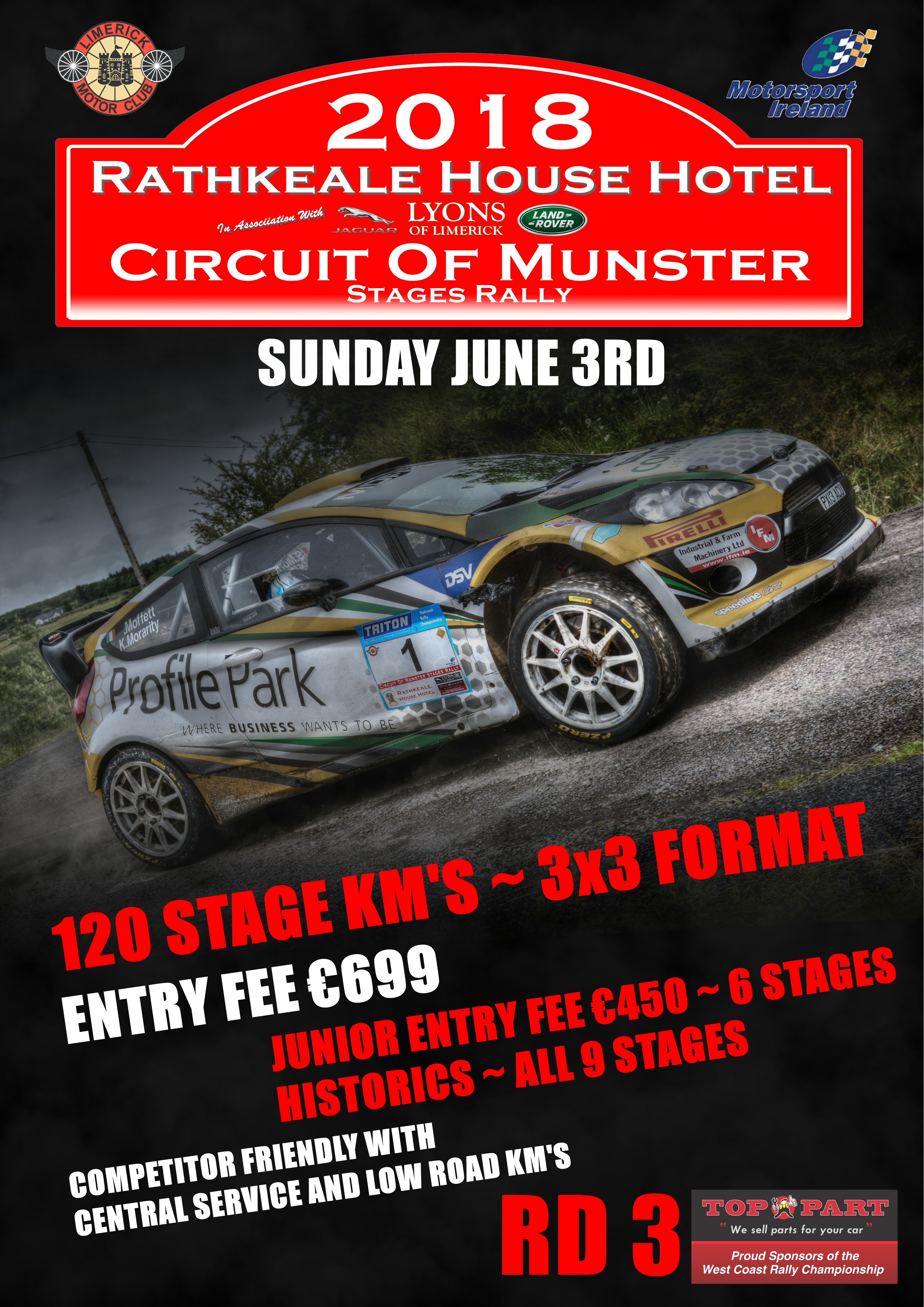