Padraig Egan used his last run to get the overall prize by 1.01 seconds from Owen Murphy. Egan was in a buggy double driven  with  Tom Daly, Murphy was in a Subaru saloon car double driving with Ciara Deasy.

Congratulations to Padraig Egan on his win today in the Limerick Autocross. It was a close race all day and It came right down to the wire. Padraig had it all to play for on his third and final timed run where he took three seconds off his time and taking the win from Owen Murphy by 1.01 seconds. Thanks to all the competitors who turned up and supported our event. To all officials, time keeper and marshals who stood out in such poor weather conditions all day. The ambulance service and doctor. The spectators for obeying the marshals. Eamonn and Shane for running such a good event, last but not least a massive thank you to Jody Ryan for the use of his premises for this event. Jody welcomed the club and has helped us in any way possible. I hope you all enjoyed today and maybe this could be an annual event for years to come in the rally calendar for Limerick Motor Club. Ger Cusack Event PRO

The event was held in generally dry but betterly cold conditions although overnight rain had left the course very wet. Jamie O'Rourke double driving with his father James. James curtailed Jamie's day by dramatically rolling the car on the second timed run but Jamie still managed to take first novice by over 12 seconds.The ladies prize went to Grainne Caplis, she siad afterwards "Limerick Motor Club ran a great day's fun in Jody's quarry Rearcross today! brill to have an event so near home! best ladies award so delighted!!!great craic driving on da loose!"

Padraig Egan in action. Thanks to Pawel Curylo of Pablo Photography for this and other photos 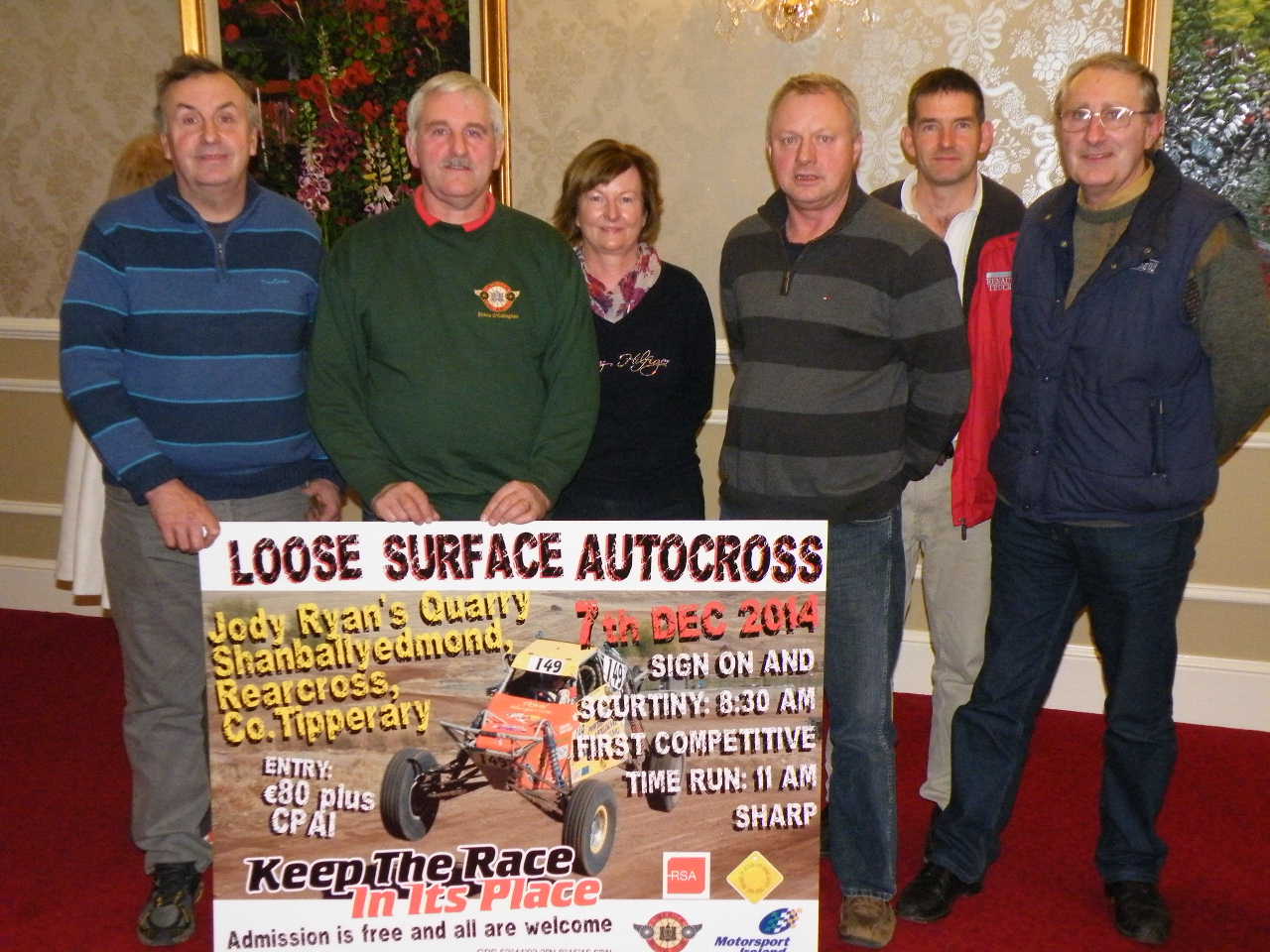 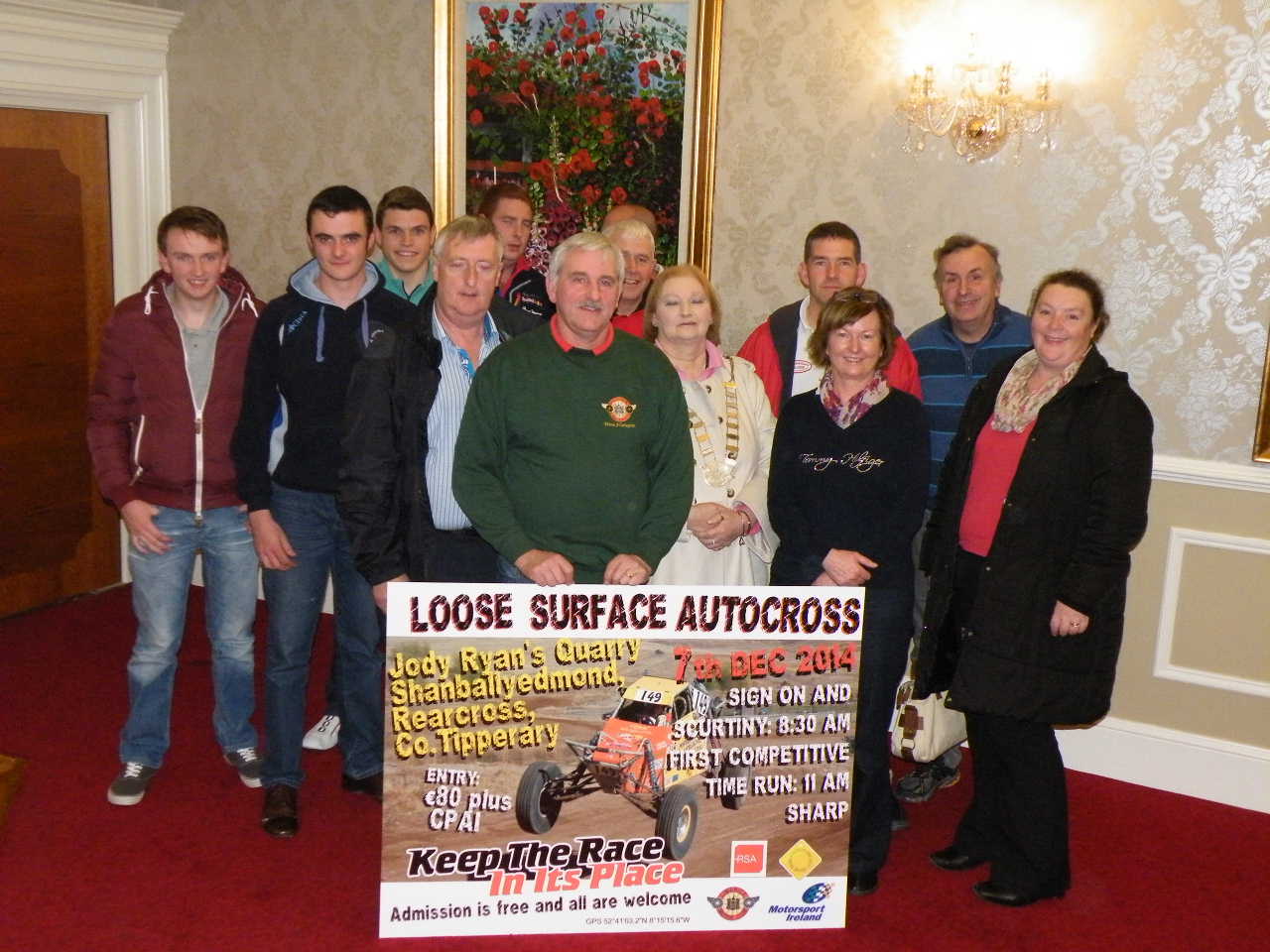 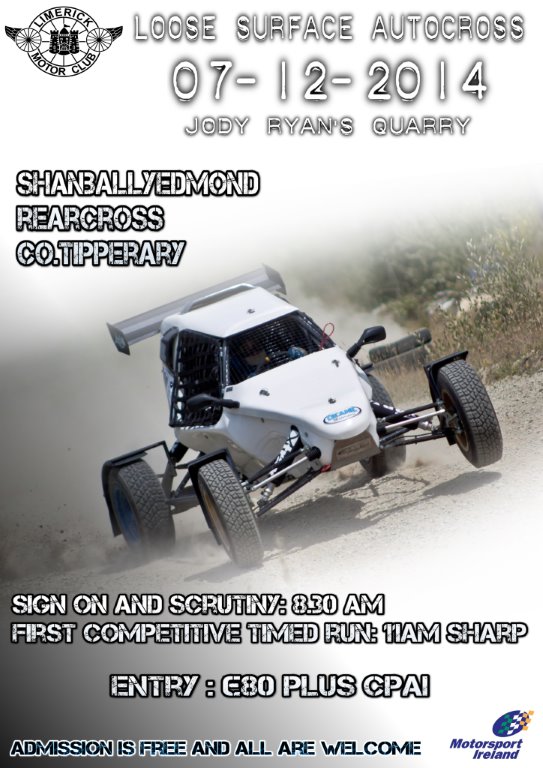 Entries have being coming in steady all week for the Autocross on Sunday, as it is December and the daylight is short the club restricted to running a maximum of 50 entries. At present 40 entries are in and confirmed. If you are thinking of competing in this event the club would ask you to make contact to confirm as you don't want to be disappointed on Sunday morning. Looking forward to hearing from you.

Any queries please contact Shane on 0872748456  or Eamon on 0872691995
If you didn't get a licence for 2014 and wish to do the quarry, any licence issued after December 1st will cover you for the quarry and will be valid for 2015 as well. This is worth considering. No IRDS needed for the autocross.

Can competitors submit entry forms as quickly as possible.

The club has secured a date 7 December 2014 to run a loose surface quarry cross.

The plan is to kick off with sign on and scrutiny at 9am,