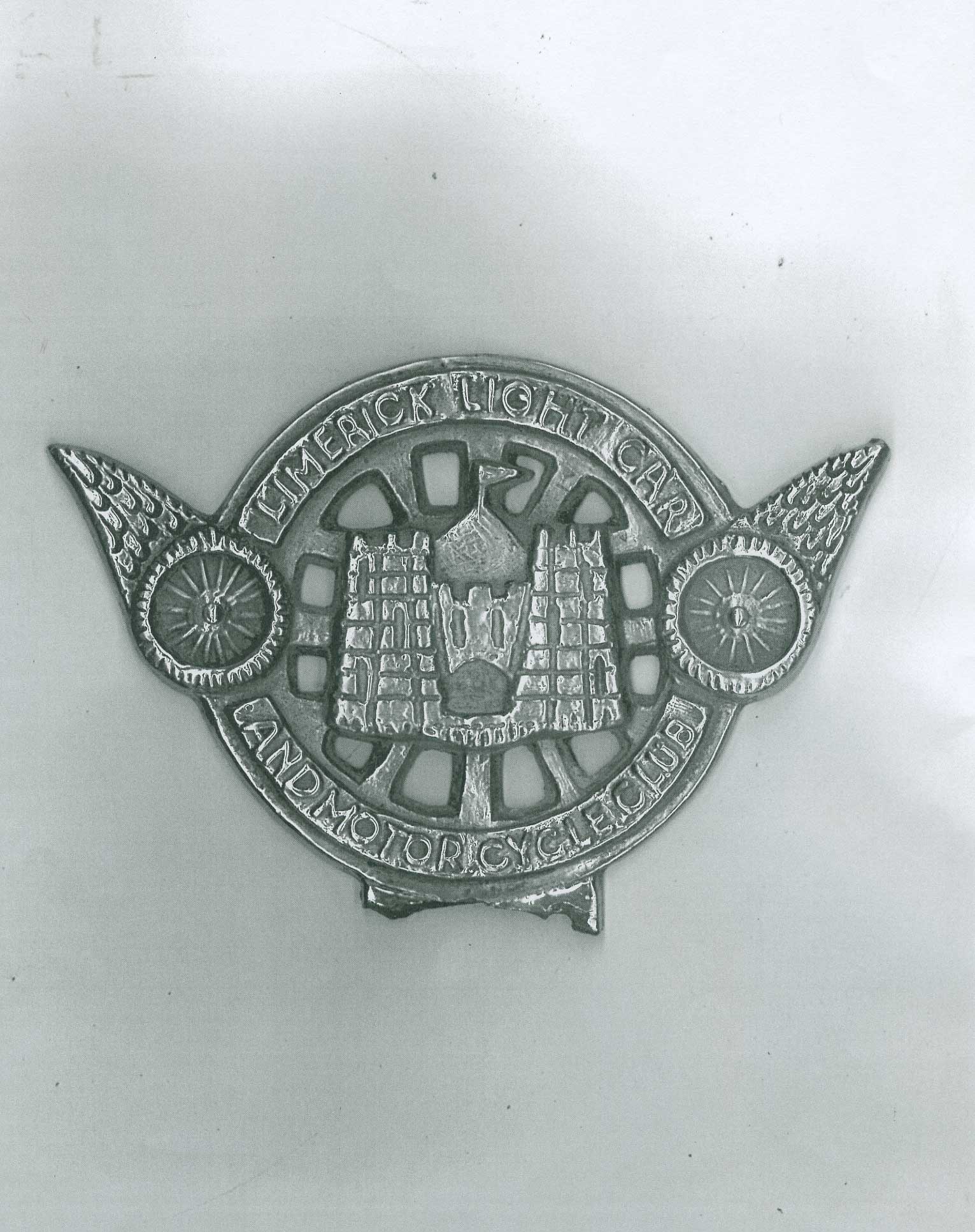 Very early badge from a private collection. It is reckoned that this badge was in use in the 1948 to 1952 period. 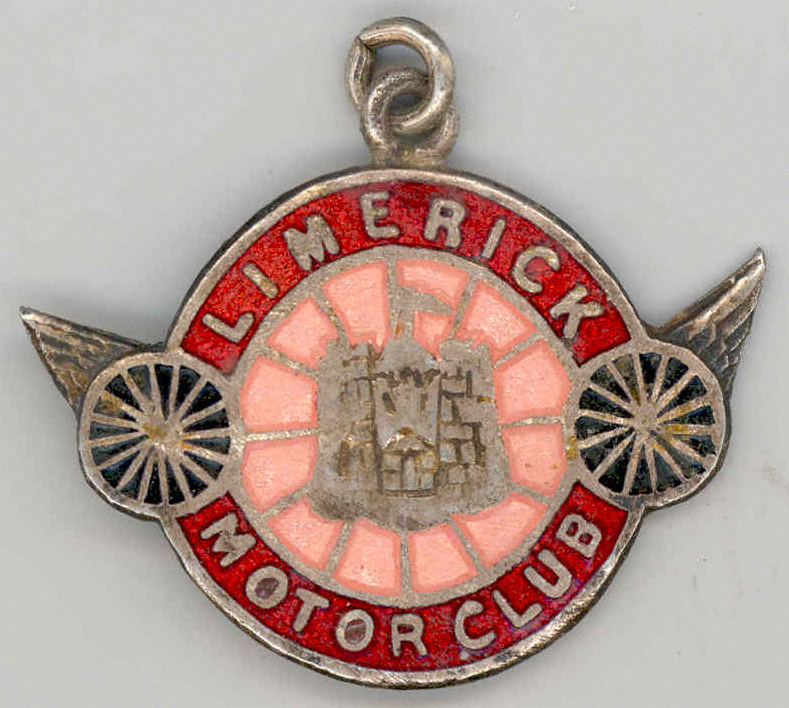 Medal, white metal and enamel. Limerick/ Motor Club. In form of a wheel, with name on outer ring (tyre) and arms of Limerick at centre set on radiating lines (spokes). At either side at 3 & 9 o'clock are small winged wheels, with wings projecting outwards. Small wheels in black , outer band red and centre pink enamel. Suspension loop with ring at centre top. 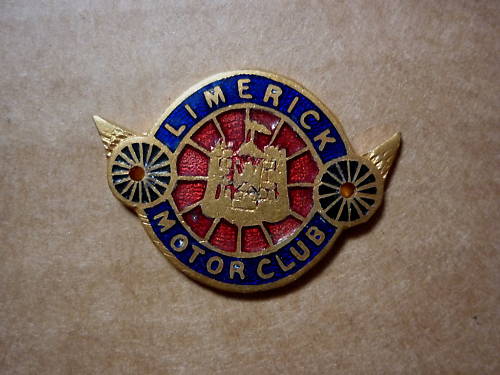 A nicely detailed badge issued for the Limerick Motor Club depicting their crest.

Picture reproduced with the kind permission of John Waldron.

Enamels: 2 (red & blue). Finish: Gilt. Material: Brass.
Fixer: None, but there are two small holes drilled through either wheel on the left and right sides. These allow the badge to be stitched onto the jacket. Size: 1 ¼“ x 15/16” (about 32mm x 23mm).
Process: Die stamped. Maker: No maker’s name or mark. 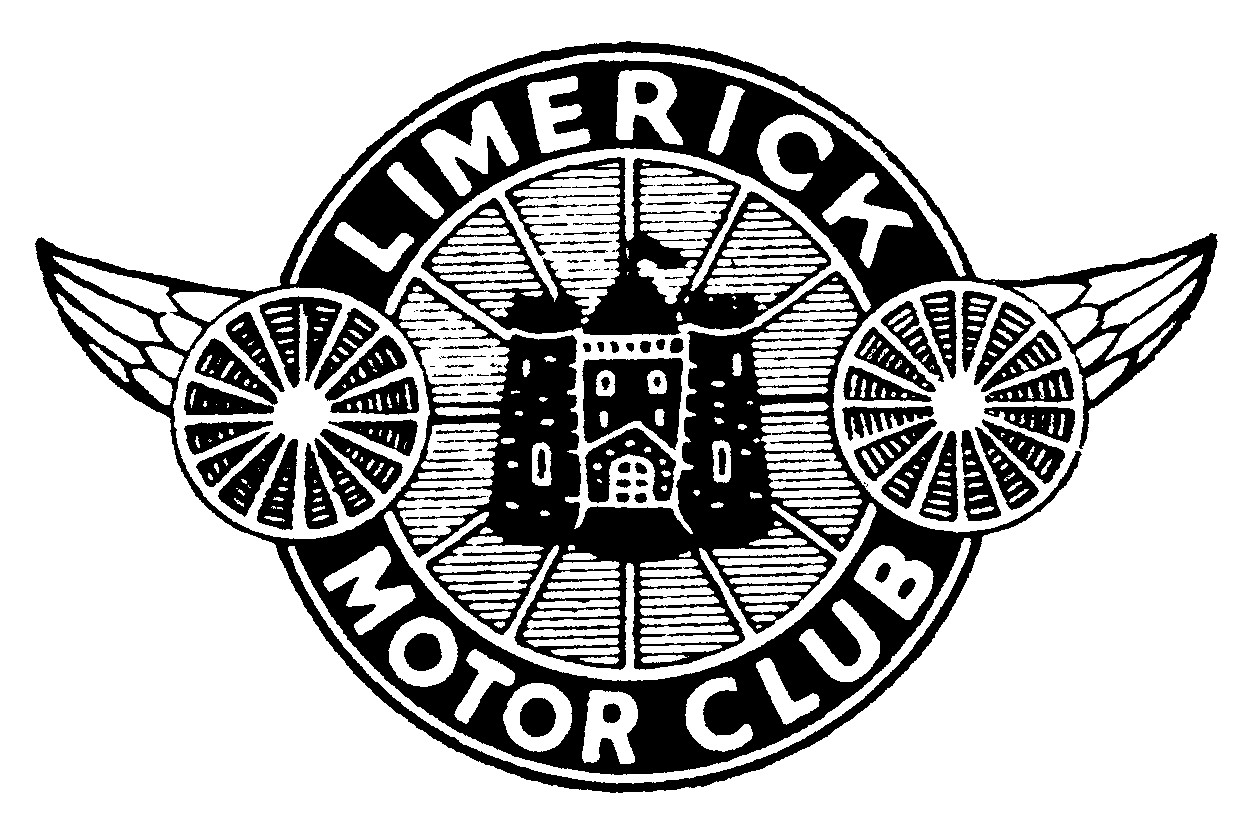 The above crest was used on print materials from about 1955 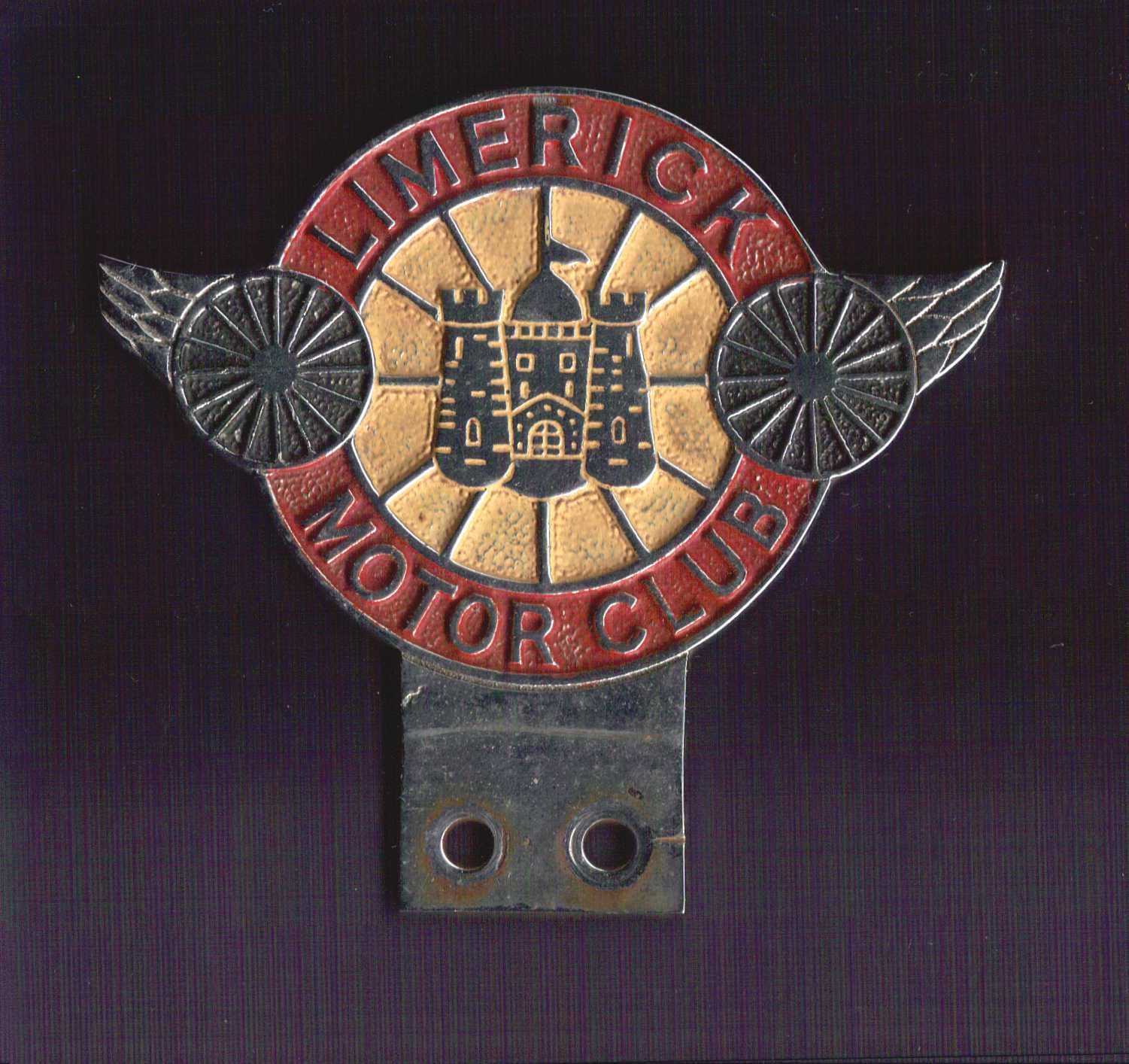 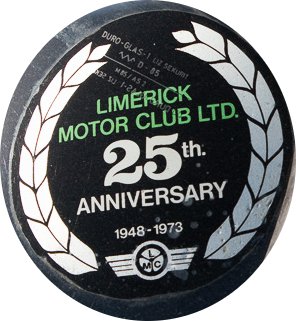 Window sticker for the club's 25th anniversary. The crest shown is a modernised version of the winged wheel. It is the only known use of this crest, records show traditional crest was back in use by 1975. 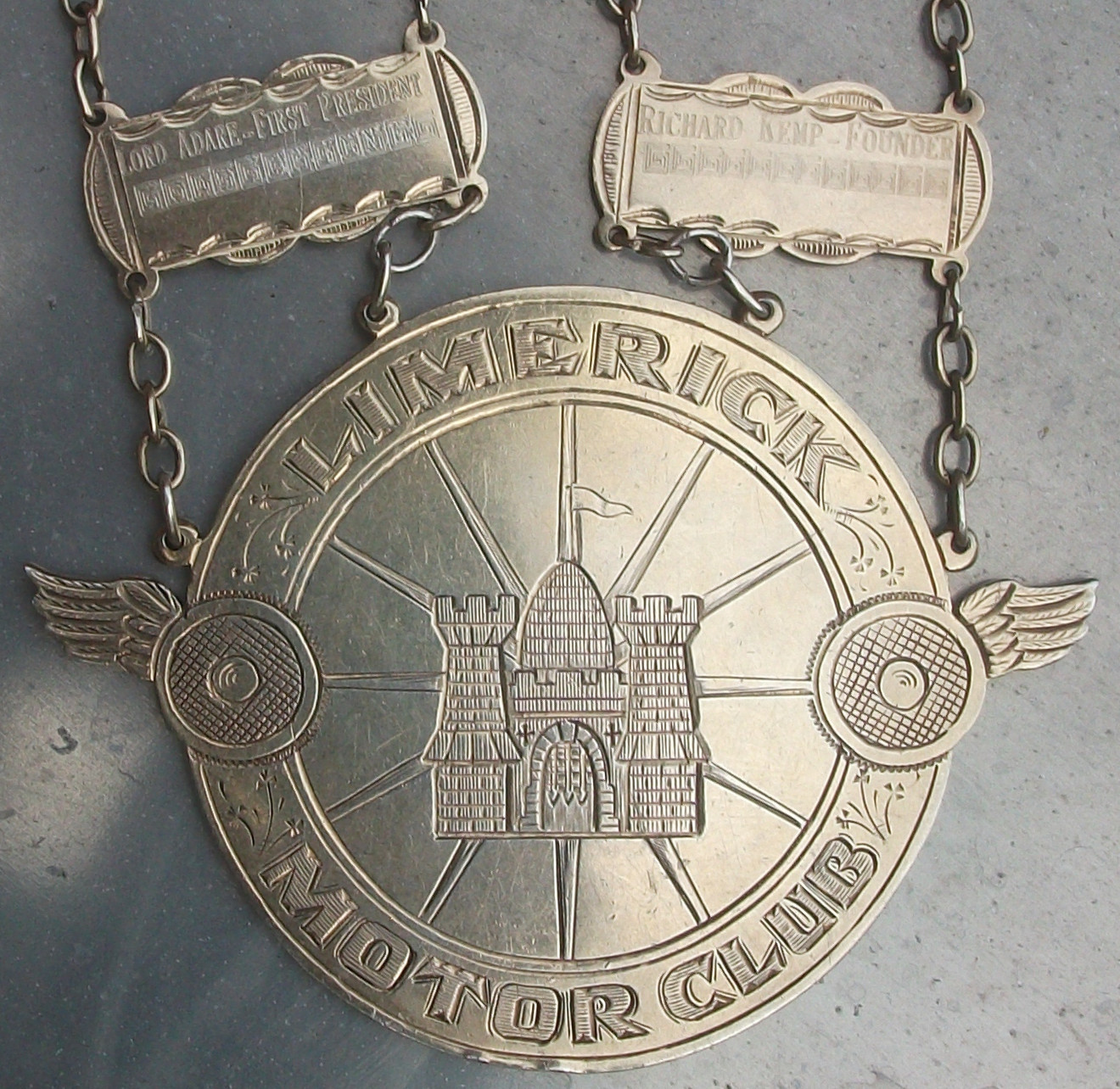 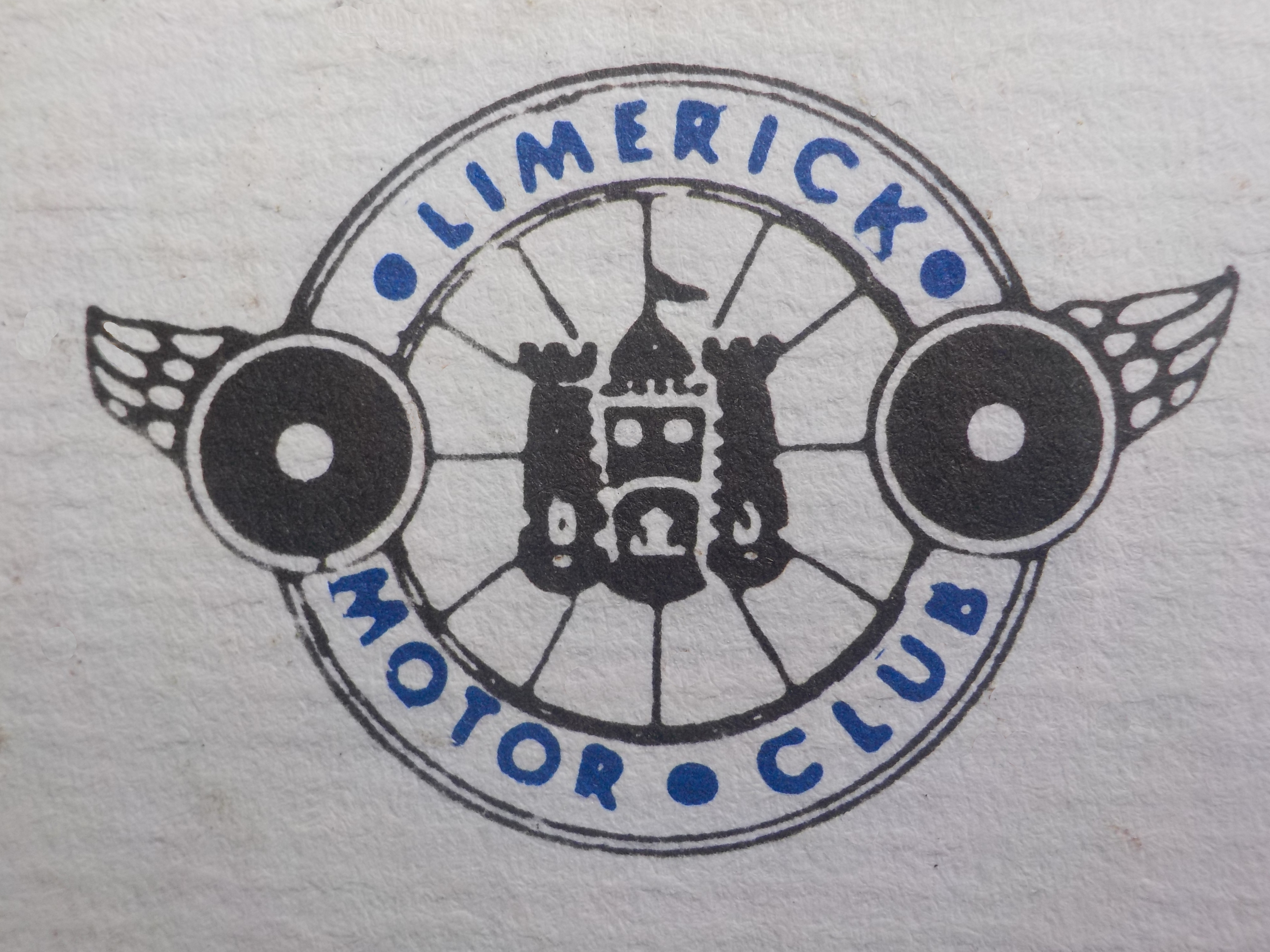 Window sticker from the late 1990s 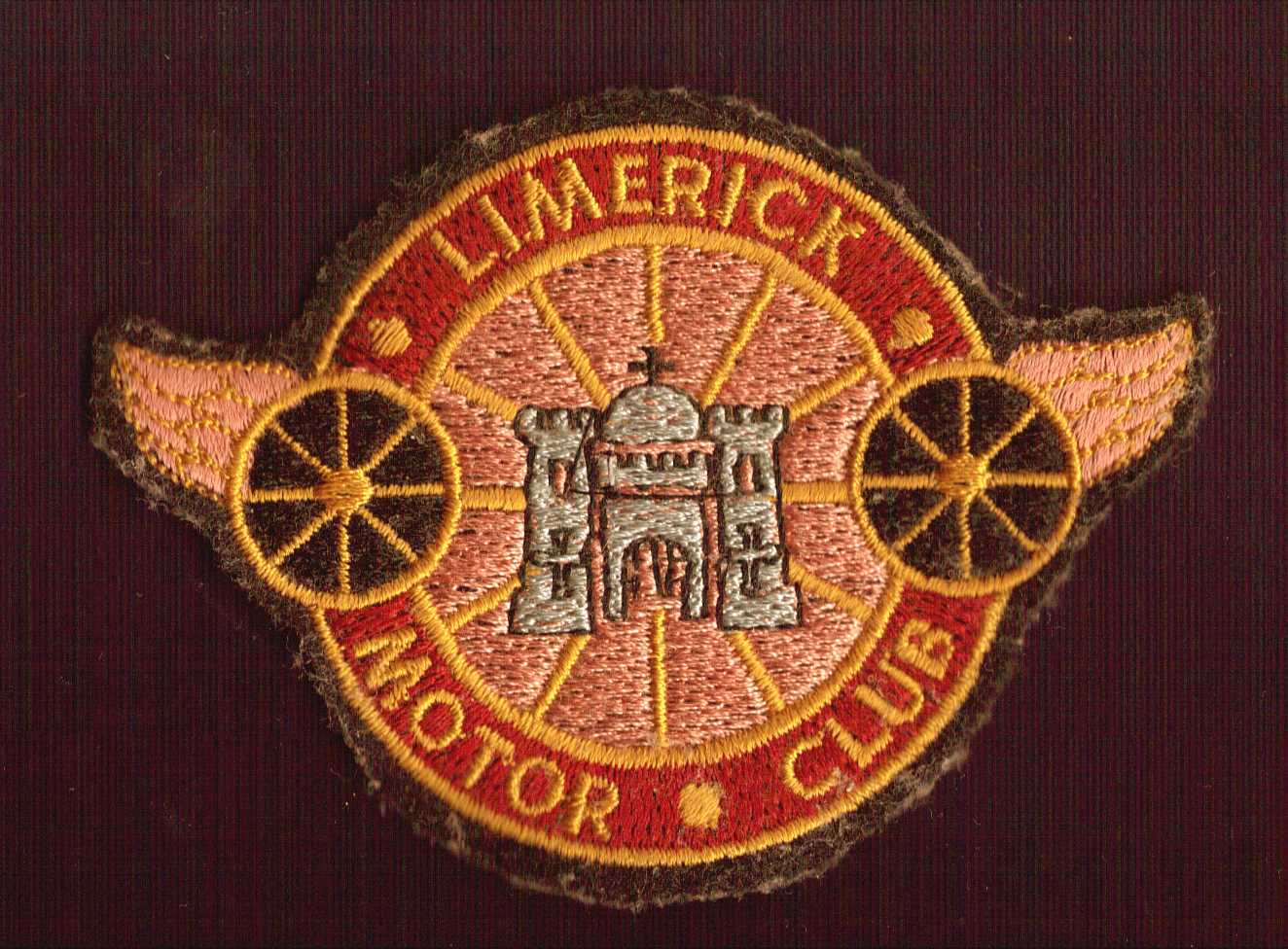 Cloth badge from the 1990s. Note incorrect use of cross instead of pennant on castle 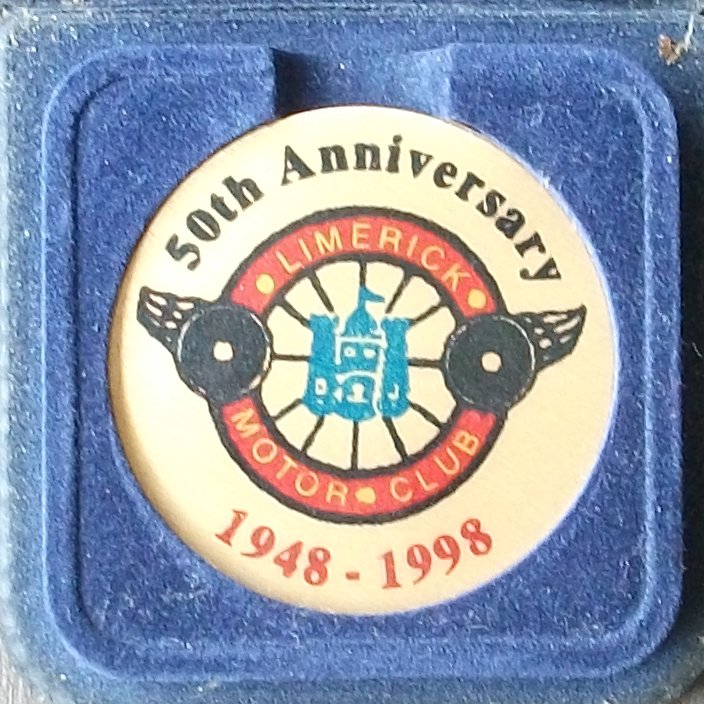 The 50th anniversary badge was presented to competitors in club events during 1998 in a presentation box. 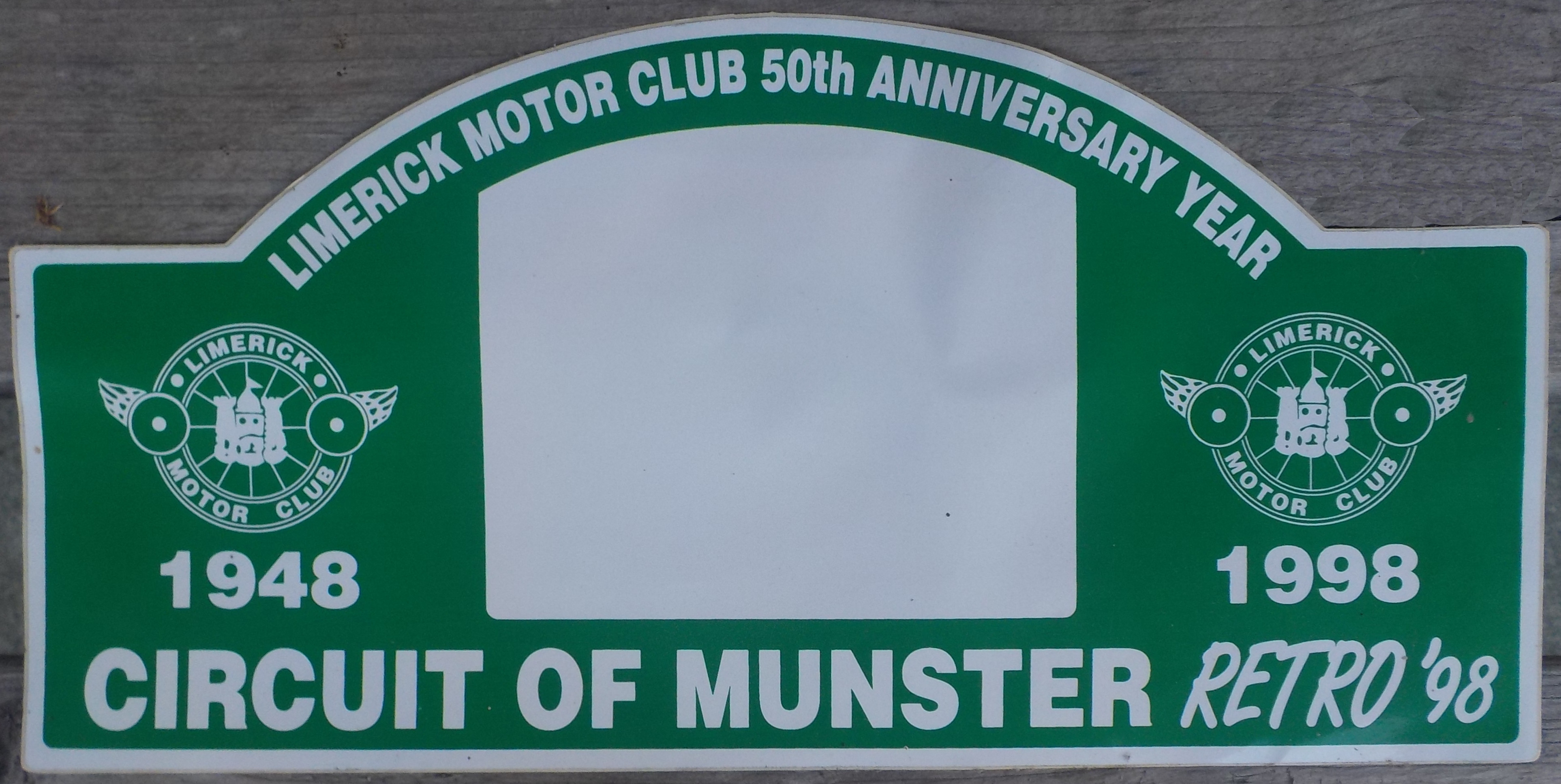 Door panel for Circuit of Munster Retro rally run on the Monday of the June public holiday weekend. It was done in the style of 1950s trials with a combination of navigation and tests. 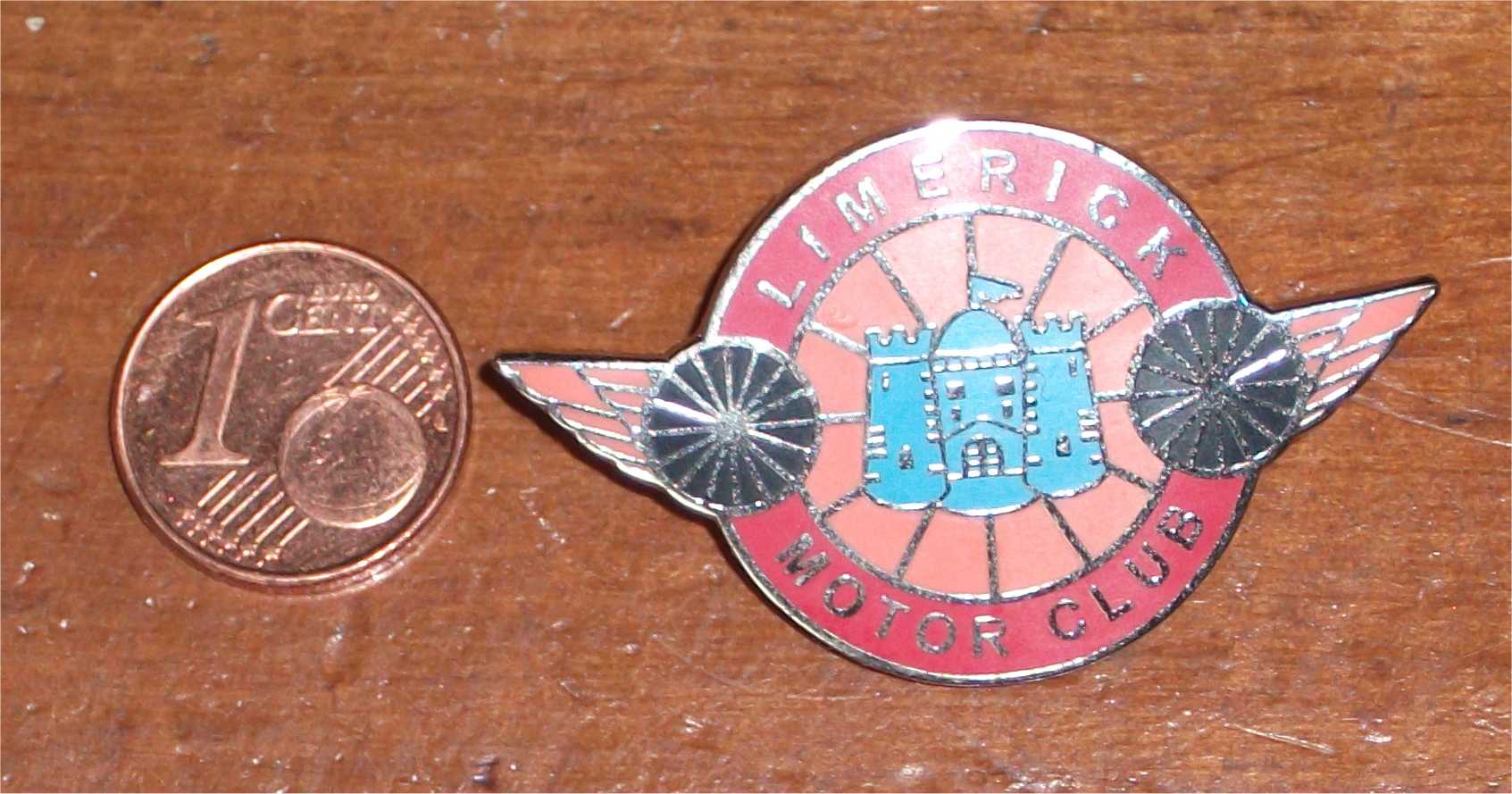 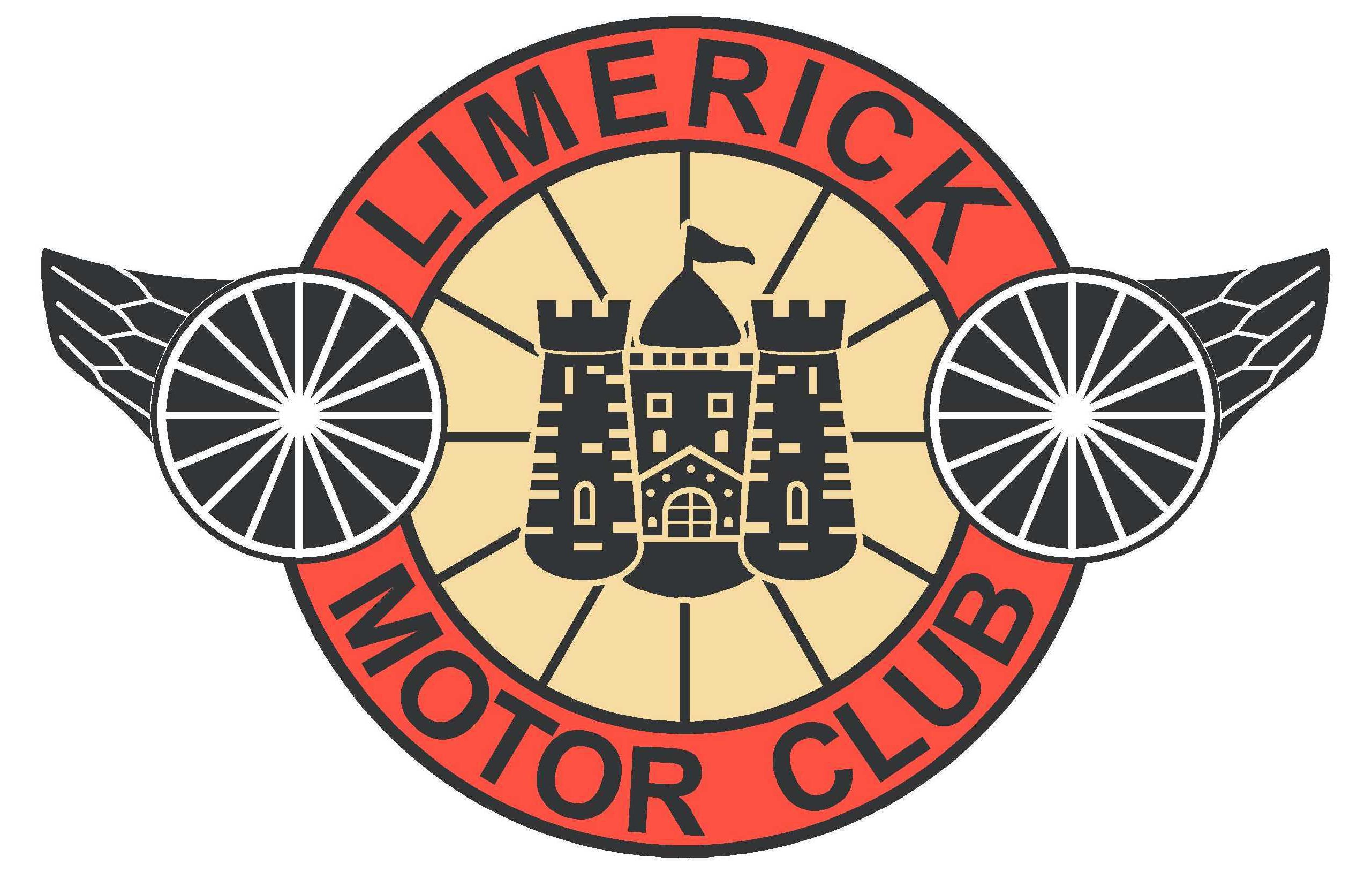 Badge created in 2013 for Limerick Motor Club, first used at the 2013 Irish Festival of Speed sprint 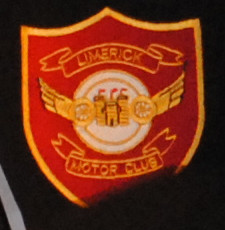 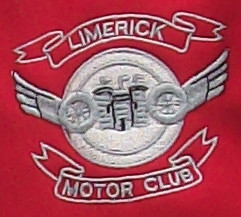 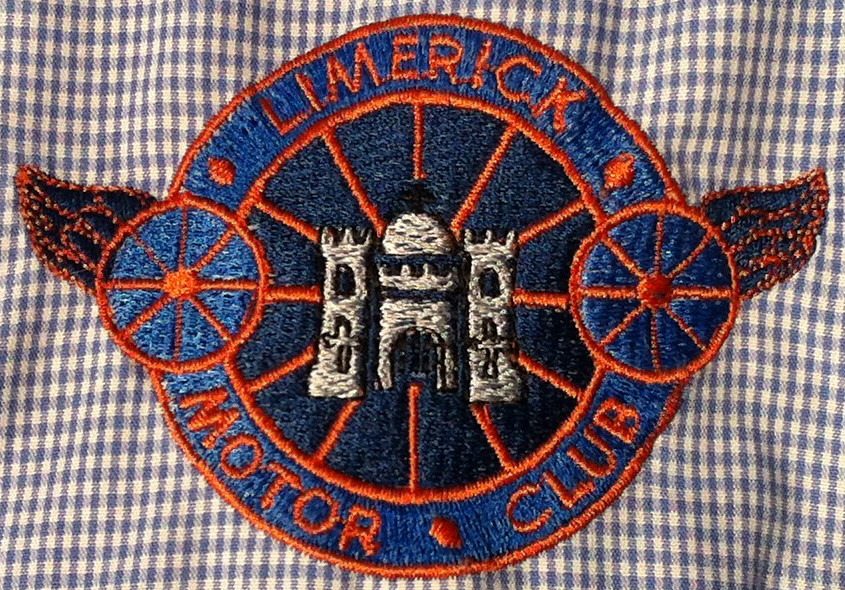 Crest used on shirts for the 2019 Circuit of Munster rally. The cross instead of pennant error is still there in the embroidered image.