The Pathfinder was competed for in navigation trials, these are night time events where skills in map reading and other route defining methods determine the winner.

Initial research has found these events if anyone has more please contact the website at email address shown on home page.

The club organised many open and closed navigation trials from the 1950s onwards.

1 June 1998 Circuit of Munster Retrospective. This was organised by Barry Tobin and Paddy McDonnell in the style of early Circuit of Munster Trials to celebrate the 50th anniversary of the club. The start was at the Adare Heritage centre and finished at the Woodlands Hotel. There were two autotest type tests each run twice and a short hill climb. There was also three regularity sections, including one that started at Lyons of Limerick Ford and finished at the Villager Bar, Castlemahon. There was a choice of navigation methods either a navigation style route instructions or a simpler Tulip intructions.

Mid 1990s A number of "flapper" (closed events not listed on the RIAC calendar were organised). This researcher has found a set of route instructions for one such event. The date or club is not mentioned. The start and finish Coordinates indicate Reens Pike, the route was scheduled for 98 minutes starting at 9:45, this indicates a distance of 49 miles with 20 vias of which three were plot and bash. The event notes state 1. Some vias may not be maned (this is as typed on the original sheet). 2. Intermediate time checks will be in operation. 3. Timing will be on sight.

20/21 April 1996 The Irish Motor Racing Club (IMRC) annual Retrospective rally had its overnight halt at the Woodlands Hotel, Adare. After supper Limerick Motor Club assisted with the night navigation section of the event, a number of local crews  were allowed to enter the navigation section.

24/25 February 1996 The Pathfinder was given to Novice winners Ed O'Callaghan and Gerard O'Connor (Austin Montego). Barry Tobin was Clerk of Course assisted by Paddy McDonnell. The event was described as an "Old Style" navigation rally. The route was about 100 miles all tarmac. Competitors were challenged with three plot and bash sections, a herringbone and a regularity. The first car left the Woodlands Hotel Adare at a minute after midnight and was due back at 04:14, Ward's garage Kildimo was the half distance control point. This was a closed club event although weekend club membership was offered for £2.50 per crew member. The entry fee £30+IRDS breakfast was available after results. 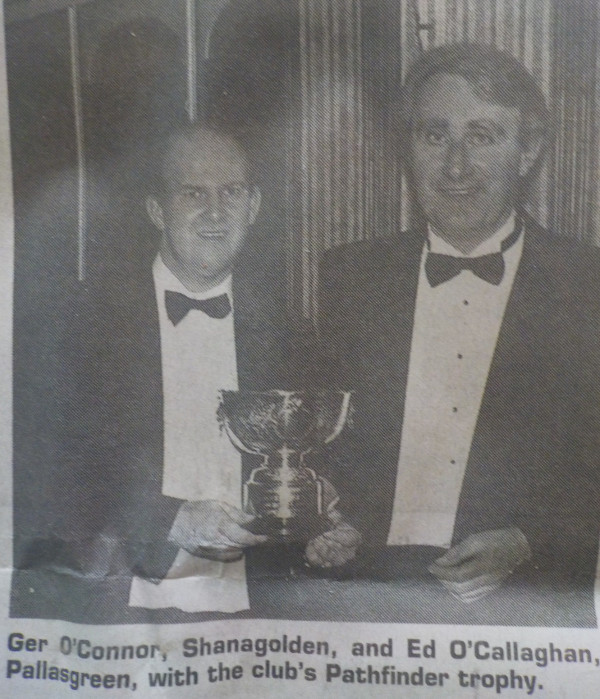 3 October 1984 Bernard Kelly planned to run classes at the Boat Club, Limerick for four weeks as a lead up to the Pathfinder Navigation trial in November

26/27 November 1982 140 miles of mostly tarmac surfaced roads starting at 10pm finishing 5:30am. 1982 saw the introduction of a silver perpetual trophy presented by Tadhg Kearney, Jeweller. Regulations for the event were available from Clerk of Course Pat Neville, Mungret with an entry fee of £15. Pat had to organise the event with Wolfgang Schnittger to end their winning streak of the previous three years.

The event was held in terrible conditions with fog and ice throughout the whole route which went through Ballyneety, Crecora, Curragh Chase, Croagh (rest halt) Meanus, Hospital with a finish at the Parkway. Route Card

27 November 1981 (Friday) Winners  Wolfgang Schnittger/Pat Neville
Clerk of the Coiurse James O'Mahoney, Limerick Motor Club Stewart Evan Conroy. Start and finish at the Parkway Motel, Dublin Road, Limerick.
Route 140 miles using OS half inch to the mile sheets 17 and 18. Entry fee £15
Timing was done by each competitor supplying a watch to be set to a time slower than true time by there start position. The watch was sealed in a box provided by the competitor.
Report about 1981 event

25/26 November 1977 the event was held on a Friday night/Saturday morning in the Barnath Mountains. The run was over 80 miles and the conditions were extremely tricky because of ice. Of an entry of 25, only 17 started and less than a quarter of this number managed to finish.
Results
1 Pat Maloney and Eddie McCourt (Autosave Imp) 87 points
2 Donal Griffin and Shawn Wall (Commodore Hotel Twin Cam) 113 points
3 Tom Casey and Catherine Casey (Imp) 156 points

23 September 1958 The trial was organised by Miss Marie O'Sullivan using a route between Limerick and Newmarket-on-Fergus stretching northwards around Sixmilebridge.
Results
1 Reg Tilson, Cork (Volkswagen)
2 George Newenham, Limerick (Ford)
3 Bryan Geary, Limerick (Volkswagen)
One remarkable feature of the event was that three drivers were also doing their own navigation!

September 1955 The Limerick Motor club Navigation Trial, organised by Dick Nash, proved a great success. A good entry faced the starter, and at the final control, after a splendid run, the following crews had completed the course without a loss of marks and so gained first class awards (drivers names first, navigators names second):-
C Downes, P E D Kennedy (Volkswagen); Mrs Fitzgerald, Miss M Leonard (Standard 8); S N Fitzgerald, M O'Connor (Anglia); J D Garry, "Bud" Fogarty (Hillman); P Sullivan, Mrs O'Sullivan (Riley); N J Thompson, N P D Fogarty (Anglia)
From the start at Limerick the trial proceeded to a control situated six miles south of Askeaton, near Creeves Cross. From here each had to visit three points before checking in at the final control at Ballygran railway bridge. The trial was so arranged that the cars visited the checks in a differnent rotation, thus eliminating the possibility of a competitor following another car.
The organisor had to pick his check points well, and navigatords had no easy task to pilot their drivers to the various points within the allocated time. For the most part the trial traversed secondary road and, indeed, in some sections the going was pretty tough. This, however, did not deter the drivers, but some of the navigators were relieved to the checker's flag, and so confirm they were on the correct route.
Several well known trials drivers turned navigators for the event. Val Baker and Bobby Kennedy, for instance, forsook the whele, and while the latter had a clear run, Val managed to approach the final control from the wrong direction and thereby was eliminated. Miss Marie O'Sullivan and Miss Corbett made splendid progress for more than half the course but failed to reach the final control within the prescribed time. Mick O'Connor, who for so many years was a very active and efficient Secretary of Limerick Motor Club, made a welcome return to trials as navigator to Sean Fitzgerald, and guided him through the trial with out an error.
Such informal events as these are most enjoyable, and they provide excellent training for both driver and navigator for the larger trials and rallies.