A social night to celebrate a successful Ciicuit of Munster rally was held at the "Coach Inn" Kilcornan Saturday 20 July 2013. A great night of craic and ceol was enjoyed. 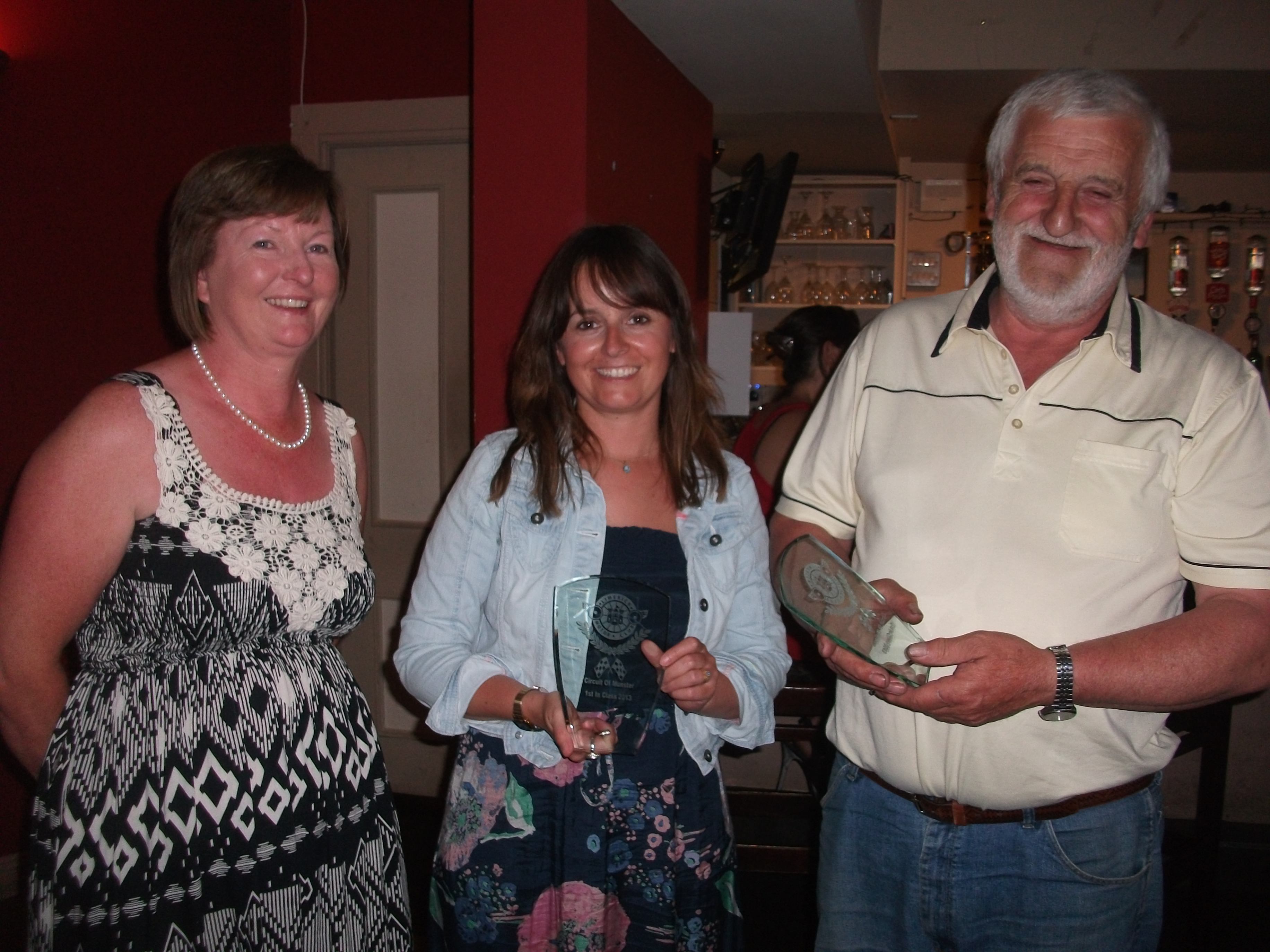 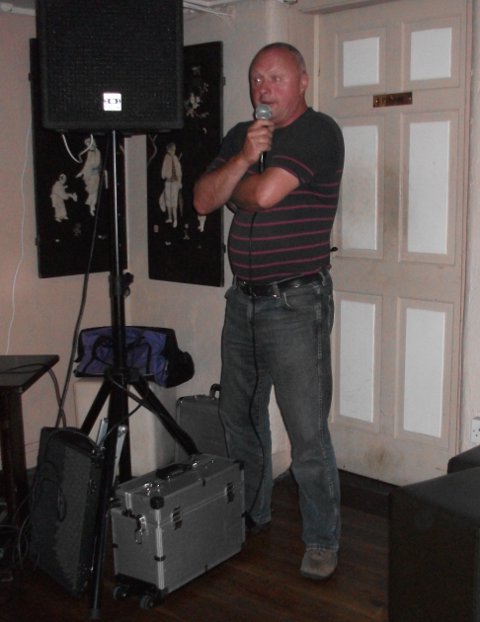 The Clerk of the Course Bill Fitzgerald thanking everyone for making the 2013 Circuit of Munster a brilliant event.

The 2013 Circuit of Munster had a nail biting finish at the Limerick Racecourse. Edward O'Callaghan was leadiing by 4.8 seconds coming in to the last stage. Kevin Kelleher set a time of 2:00.2 to Ed's time of 2:07.0, this gave Kevin the win by 2.0s

The sun was out and about and so were the spectators.
What was last year a wash out was now very appealing to spectators around Ireland that big orange ball we rarely see came back for the June bank holiday weekend!
The excitement was huge in Parc Ferme early Sunday morning Anti Lag Firing away in the turbo monsters you had the high reving Escorts warming up honda Civic’s been compared with each other Navigators checking start times all the last minute checks been carried out.
As the crews made the way to stage 1 we were made aware that it had been cancelled and that a drive through was in order but not to worry still plenty of action to be had in the 8 other stages that the club had to offer.
At the top The Mighty Colm Murphy with navigator Don Montgomery were at no 1 Cork man Kevin Kelleher with Limerick man Sean Mullally on the notes sent in a late entry in the Impreza WRC and carried the big Number 87 on the door. No 2 was local man Edward O’Callaghan and Ger Clancy in the white and orange Morenane transport Escort followed by Ed Synan and Denis O'Connell in the Mid West Tyres backed Escort. At no 4 the Mighty Paul Purtil with Diarmuid Falvey on the notes in the gold beauty . No 5 was Frank Sweeney and Jane Coogan another crew not shy of putting in great times!.
Shane Maguire and Martin McGarrity at no 6 Subaru n11
Pat Kelly and Jonathan Kelly at no 7 in their Subaru
Sean Lyons and Dean Raftery at no 8 in Subaru n12B
Alan o’Xallaghan and Cathal McGrath in the bug eye Subaru at no 9
10th on the road was Local man Aidan Walsh and clare man Jim Casey.
The top ten might not have appealed to people looking for more WRCs but trust me when I say this! When you put neighbours up against each other it does not matter what they drive! You will see a battle that will push the limits of crews to the top!.
Ed O'Callaghan took the early lead in a cracking attack of stage 2 with Purtil second and Kelleher 3rd in the WRC Subaru with last years winner Colm Murphy 4th and Ed Synan 5th.
Stage 3 times remained the same why I still do not know so no change.
Stage 4 we were missing colm Murphy and Kelleher moved one place ahead of the gold Escort of Paul Purtill in his Subaru but still 8.9 secs off the leading crew of O'Callaghan and Clancy.
Stage 5 seen a storm of a time from O’Callagahan to push his lead ahead of the chasing WRC machine of Kelleher and Mullally with purtill 3rd and Synan 4th and Frank and jane lying in 5th it was only heating up! Along with the weather.
First of the 4wd cars outside the top 3 at this stage was Alan O'Callaghan who was showing wicked pace in the Subaru lying in 6th place with the mk1 of Tom Relihan and Maurice Mcgelligot in the orange mk1 Escort in 7th followed by the three Subaru’s of Maguire Lyons and Kelly.
What was standing out to spectators and crew at this stage was the crew leading class 11R who were 13th o/a Jason Costello and Garry Carroll. What an amazing drive coming from the crew in the 1600 escort.
Stage 6 seen Kelliher set fastest time and close in on Ed and Ger with the only other change in the top ten been Maguire passing out Relihan in the escort.
Stage 7 was another win for Kelleher and the gap was down to only 4.6secs. Relihan regained 7th and Maguire fell back to 8th Alan O'Callaghan was 5th followed by frank Sweeney and Stephen Greaney moved in to 9th in his Ford Escort with Sean Lyons back at 10th .
Stage 8 was another run over Beigh Castle a real drivers stage! O’Callagahan new here he had to set a blistering time as the WRC of Kelleher and Mullally was closing the gap rapidly.
As the times came in Ed was 0.2 of a second quicker than Kelleher and trust me that’s a lot for a crew in a 2wd escort holding off the charging bull of a WRC!
Purtil 3rd
Synan 4th
Sweeney 5th
Alan O'Callaghan 6th
Maguire 7th
Greaney 8th
Lyons 9th
And Benny Kennedy moving into 10th o/a.

And on to stage 9! The decision maker a short stage just over 2km with lots of gravel and good concentration needed a stage were you can lose a rally or win a rally with a simple mistake! No room for error!
And out on top came the llying Cork man Kevin Kelleher with Sean Mullally by just 2 seconds over Ed O'Callaghan and Ger Clancy and Paul Purtill in third
The rest of the top ten
4th and top 2wd Ed Synan
5th Alan O'Callaghan
6th Frank Sweeney
7th Shane Maguire
8th Stephen Greaney
9th Sean Lyons
10th Benny Kennedy
Congratulations to Kevin and Sean. Great to see Kevin get a result he deserves with Subaru.
And to Ed and Ger in 2nd after a great drive by the crew
And Mr purtill in 3rd
Ed Synan took top 2wd honours and 4th o/a!

It was a mixed day for Limerick crews
My first day out was with Paul Murphy car 61 green Twin cam it was a mixed start with Paul showing me the ropes going through stage 2 and he had the little 110bhp 4age engine screaming the car was handling well but unfortunately it slowly lost gears. It soon did not want to select third or fourth. We came off the stage 3rd in class but our day went down from there! We mounted a bank coming into a fast square left as paul had no gears we mounted a bank a very soft one but there was a rock. That damaged the oil cooler and pushed the sump guard up on the sump! We continued back to service after stage 3 and with the help of Stephen Casey got it going again! It was slowly leaking oil so by the time stage 8 came the engine was on its last legs! 2 miles in and she threw a leg out of the bed as they say!
Thanks to Paul for taking me out and thanks for putting up with me! I had a serious craic all day despite problems! Any picture will prove that!
Ger Lyons and Stephen O'Brien retired with a broken drive shaft in the beautiful newly built Civic.
Micheal Nolan and his brother John finished 3rd in class 11f in the red Honda Civic. Micheal showing the crowd how to take a fwd civic through a spectator stage fast!!!
Jimmy Kiely started and finished his first rally in his ex Mark Higgins eg Civic with Micheal  John O'Brien on the notes great result for the boys!
Aidan Walsh finished 14th o/a.
Sean Moran finished 17th o/a and 6th in class.
David Carmody retired with fuel pump failure.
Declan Gannon retired with diff trouble.
John Dannaher finished 20th o/a.
John Collins and Peter McDonnell finished 40th and 2nd in class.
Kenneth Ryan finished 44th in his ford Escort.
Con Mulcahy 45th .
Denis Dineen 46th.
Hazel O'Callaghan and and Gary Cussack finished 47th and 2nd in class.
Seamus and David Upton finished 56th o/a in their EG Civic.
Alan Naughton and Neil Jordan at 58th .
Ed Walsh at no 60.
Liam and June fitzgibbon at 61.
David O'Flaherty and Tommy O'Connor at 62.
Gerard Dineen and Anthony Madigan at 63.
Dave and Rita Dee third in the historics.
Andrew Ryan and Tommy Hayes 3rd in the juniors a great drive by the crew.
Kevin O'Connor and Donal Balfe retired with mechanical problems.
That’s just a look of some of the Limerick crews/drivers and navigators! From what I can see and what I know!

Results from Shannon Sports IT

Selection of photos by M2merallyphotos

Programme deliveries are planned for Wednesday 29 May
Outlets include Centra Askeaton, Maxol Kildimo, Centra Patrickswell, Centra Clarina,Kielys shop Pallaskenry, Roches shop, Shanagolden
Various shops in Newcastle West, Adare and Rathkeale signs will be displayed.
They will be on sale Saturday during the day in the Rally office at the Racecourse and again all day Sunday
Programme sellers will be on the grounds of the racecourse as well.

We are Family by the Nolans

Catherine Nolan writes "My brother Michael Nolan has new navigator for the Circuit of Munster our youngest brother John Nolan competes in class 11 with his Honda Civic.
Jimmy Kiely, who used to navigate for Michael Nolan, has bought a Honda Civic and will be out for the first time in the Circuit of Munster with navigator Michael John O'Brien in class 16.
I hope to be doing the rally myself with Maurice Meskell in his Celica in class 20."

Ed O'Callaghan is waiting for a new engine. Frank Sweeney is ready for the start. Mike Walsh is after a engine rebuild. Ed Synan is good to go. Three members of the Ryan family are driving in the Circuit of Munster, Pat the father and sons Kenneth and Ian. Gary Reidy is back rallying after three year break. Paul Purtill is competing in his new Mk 2 with Kerry codriver Dermot Falvey. Aidan Walsh brings out his red 205 with Clare man Jim Casey on the notes. A Peugeot 205 is also the car of choice for Kevin O'Connor.

The Circuit of Munster launch.

Took place in the Woodlands House Hotel on Tuesday 21 May

Closing date for entries for the Circuit of Munster is 19 May. To secure your entry you must pay a deposit of €150 to entries secretary Angela Fitzgerald Boherard Pallaskenry Co.Limerick Tel:061393442.

The 2013 Circuit of Munster is shaping up to be a great day, with a steady flow of entries coming in.

The club is also pleased to announce we will have Slowly Sideways out on the stages too.

There will also be a great family fun day around the spectator stage/service area with helicopter rides, stunt bikes etc, for more details click here

Amendments to Regulations
9 May 2013 Number of Starters 131, previously 151
9 May 2013 Juniors and Historics will either start on stage 1 and finish after stage 6, or start on stage 4 and run to stage 9 depending on the number of entries.

Online entry at Shannon Sports IT